Want to Make Some Meth? Not With This Sinus Medication...

Looking to abuse your mind and body by cooking up some meth? Better skip the latest nasal decongestant on the St. Louis market: Zephrex-D.

Highland Pharmaceuticals claims their product cannot be used in the production of meth. Most meth recipes use a concoction of household chemicals to modify pseudoephedrine, which can be found in cold and allergy pills, to create meth crystals. Highland says that while their product contains pseudoephedrine, they have perfected a formula that doesn't allow the chemical to crystalize.

In March, narcotics officers confirmed that attempts to turn Zephrex-D into crystal only created a bottle of black goop. Try putting that in your pipe and smoking it (please don't!)

If you're into cold relief and fighting drug crime, check out Zephrex-D at these stores. 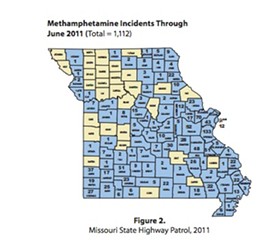 Since 2001, Missouri has had the highest rate of meth lab seizures in the nation, and state lawmakers have struggled to respond with the appropriate legislation. Unlike other municipalities that have instituted their own laws, St. Louis city and county do not currently require doctors prescriptions for over the counter cold meds.

Meth lab busts have been disproportionately higher in counties that do not require prescriptions, and cops caution that meth cooks pour into unregulated municipalities like ours.

A number of counties are already writing in exceptions for Zephrex-D into their prescription laws. If this medication takes off, it may become one of the only nasal decongestants available at pharmacies without a doctor's prescription. It might be time to start getting used to the stuff for your stuffy nose.