Editor's note: Jonathan Gold is a third-year law student at Saint Louis University. He penned this story on Sunday after learning of the death of the man he referred to simply as "Coach."

It was a little less than six years ago that I had my first encounter with Rick Majerus. I was finishing my sophomore year at Saint Louis University, and, like many, was a bit disappointed with our school's athletics at the time.

I loved college sports, basketball included, but didn't see much hope for our school in the near future. I was grabbing breakfast in the student center, and between wolfing down a bagel and making my way out of the building, I noticed something going on. A couple television news crews were making their way into a ballroom in the basement.

I peeked my head in and saw the stage and microphones set up in front of a Billikens' backdrop. I went to the back of the room, opened my laptop, and Googled "SLU Billikens." There was my answer.

I didn't know much about Majerus at the time, but another quick search painted an interesting picture. I'm not sure why, but I was hooked. I was both excited and intrigued. Why would a guy like Majerus come here? As far as I could tell, he had no roots or connections here, he had a good job as an analyst, and if he wanted to coach, he certainly could go somewhere with an easier turnaround job than SLU.

That was my first lesson I learned from Rick Majerus. For him, it was never about the name. It wasn't about glory or the wins. He loved the challenge. He thrived from it. If it was easy, it wasn't a worthwhile endeavor. His life was one worth living because he took the road less traveled and turned the seemingly impossible into the possible.

I decided to stick around the student center and see what I could see. I wasn't the only student who had caught word of what was going on. A few of us blended into the back of the press conference and listened. After hearing the typical skew of questions, and what I would come to learn was Coach's typical drawn out answers, I got my first taste of the side of him I grew to love. He was humble. 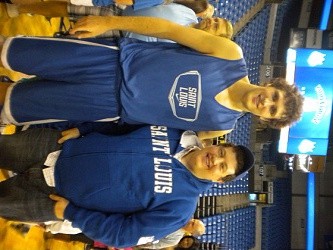 After the conference, as people trickled out, Majerus, true to his word, made his way towards the back of the ballroom where some other students and I had been sitting.

I don't remember exactly what we said to each other that day. I remember it lasted about 90 seconds -- far longer than most big-time college basketball coaches would ever spend talking to some random sophomore who had sneaked into a press conference. I remember getting the feeling he actually wanted to know me. There were no cameras rolling, this wasn't just a good snap shop for the PR department.

I'm not sure what it was, but ever since that moment I felt like somehow, even after just a minute, he knew me. Maybe he saw a bit of himself in me that day -- a big Midwestern kid at a Catholic college with a passion for sports. He had spent his whole career sizing up and getting to know young men. I wouldn't be surprised if 90 seconds was all it took for him.

A week or so later I ran into Majerus again. I was at the bar Humphrey's across the street from campus. He came in with a colleague, and on his way to finding a table a few people stopped him and said hello. What happened next I'll never forget. He made his way past my table, almost walked right past me, but then noticed me, turned his head, and said, "Hey, Jon."

It was a small gesture that I'm sure he forgot about the instant it happened. It doesn't seem like much, but it meant a lot to me. And for a man who was transitioning to a new university, with a thousand new names to learn, he somehow remembered my name.

Its fitting that on the day he left us, I find myself Googling his name again, just as I did the day I first met him. As he might put it, it's just "the circle of life".

As the news of his death spread earlier this week, stories of all of Rick's gestures have been shared by former players, fellow coaches and reporters all across the country. I've made an effort to read every single one. You should too.

I only had a few more face to face run-ins with Coach throughout his time at SLU. I doubt he remembered my name much after that first week or so at SLU. I don't care. Like he taught me, names aren't important. It's about accepting the challenge of leaving this world a better place than how you found it. And if he touched me, the lowly sophomore who wandered into his press conference, then surely, this world is a far better place for all the lives Rick Majerus touched.