From the Margins to Market Street: Pride Fest Is Coming Downtown in 2013 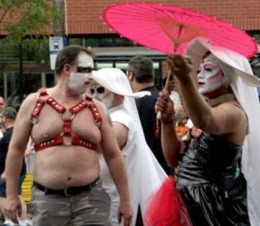 Howard tells Daily RFT the main reason for the move is that attendance has ballooned, and a more "scalable footprint" is required to accommodate the organizers' ambitions.

Howard adds that whereas Tower Grove's closing hours limited the scheduling of entertainment, downtown will allow shows to last longer into the night. Plus, there's better access to water and fire hydrants downtown.

Pride Fest has been held in Tower Grove for the past 12 years, Howard says. Before that, it was in Forest Park, and before that, the Central West End.

"We've really grown from beginnings in Central West End," Howard says. "Now we have the support of the Mayor."

Indeed, in a written statement Mayor Francis Slay says that he predicts "the biggest party Downtown has seen in decades."

Thus, more of this!