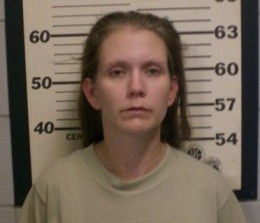 According to the Madison County Sheriff's Office, at least one of Amy Zielinski's three robbery attempts on December 1 actually succeeded.

In that one, the 34-year-old allegedly came into the BP Amoco in Pontoon Beach just after noon on Saturday, showed a "handgun," took some money and left in a red-colored vehicle.

The other two attempts, however, didn't go so great.

About 15 minutes later, deputies responded to Gene's Barber Shop in Granite City (where Zielinski resides). A guy selling pecans in front of the shop said a woman had just approached him, grabbed her waistband like she was packing heat, and demanded his money.

The pecan-seller handed over his wallet. She went through it. There was no cash. Fail.

So she handed it back. (That was nice of her.)

She then sped off in a red-colored vehicle, the victim said.

While deputies were dealing with that incident, a third incident was called in from the 508 Variety store, also in Granite City.

The clerk there said that, just before noon, a woman had come in an asked for a pack of smokes. Then she pulled up her shirt to display her waistband and told the clerk to hand over all the cash.

The clerk said the suspect fled in a red Pontiac Sunfire.

A few hours later, a deputy stopped a car matching that description. Amy Zielinski was the driver.

A toy handgun was found in the vehicle.

She's been charged with felony armed robbery and felony attempted aggravated robbery. Latest is that she was being held on $100,000 bond.