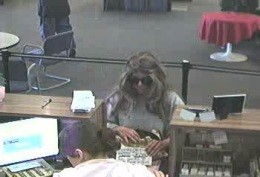 We say "person," because St. Louis County Police believe it was a man dressed as a woman. (More on that in a second.)

The bandit passed a note to teller saying s/he was armed. The teller gave the bandit some money. (Police spokesman Randy Vaughn tells us he doesn't know how much.)

Then the suspect left.
The county cops are describing the suspect as thin, about 5' 5", with "a long brown wig, large rimmed sunglasses, and heavy tan make-up extending from the cheek area to the forehead."

So, in essence, we're looking for the entire cast of Real Housewives of New Jersey.

It's not totally obvious from the four photos released by the cops that the perp is a man; although, the photo below seems to reveal some mannish forearms. What do you think?