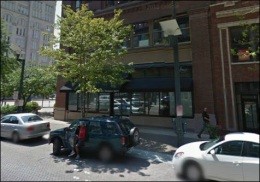 A teenager suffered a gunshot wound to the head Saturday night after a fight broke out at a private party inside 1204 Washington Avenue, police say.

(This space used to be Club Amnesia and Club Lure - two nightclubs operated by the Trupiano family -- but manager Tony Trupiano tells Daily RFT that Amnesia closed in late summer, and now the family has "absolutely zero" to do with what happens inside the building.)

According to police, the two victims -- both described as black males, one 17, the other 19 -- were ejected from the space along with others at around 10:30 after the fight erupted.

The victims got in their vehicle and drove south on Tucker Boulevard until they hit the red light at Locust Street. At that point, "several gunshots" were fired at them.

A bullet barely missed the head of the 19-year-old, causing only a graze wound. He was taken to the hospital in stable condition.

The incident seems to have caused a bit of a political misunderstanding.

The Trupianos, who used to operate their clubs in the space, have frequently come under fire from City Hall over alleged liquor license violations and, most recently, alleged forgery of documents submitted to the Excise Commissioner.

After Saturday's shooting occurred, police issued a report listing the location as Club Amnesia, even though that club has closed.

The resulting media reports appear to be what prompted Mayor Francis Slay to tweet the following on Sunday morning:

(He's linking there to a story about the alleged forgery, not Saturday's shooting.)

But later on Sunday, news outlets such as the Post-Dispatch and KTVI Fox2 updated their stories to show that Amnesia and the Trupianos weren't involved after all.

Captain Sam Dotson, operations director for the city, made exactly that point to the PD, then added this (which might cheer some of you loft-dwellers on Wash Ave who aren't crazy about young troublemakers at that location):

"We've talked to the landlord and he said they were not going to do any more private parties," Dotson said. "They are looking for a tenant with a business that is not alcohol-related."