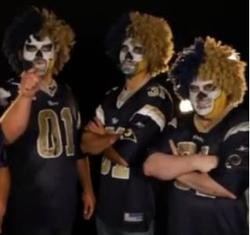 Well, it took 149 minutes and 34 seconds, but the Rams finally, finally beat the San Francisco 49ers. In doing so, they took the season two game series, 1-0.
Personally, there was a point in overtime when I almost starting rooting for another tie, just because I've never seen a team play to a pair of ties in the same season, and I kind of would have liked to. On the other hand, when Greg Zuerlein put that 54 yard field goal through the uprights, I realized that was stupid. Unusual, cool bit of historic oddity or no, ties suck. Herm Edwards said it best: you play to win the game. Piss on a tie.
So, sure, it took almost the maximum 150 minutes this year, but the Rams beat the 49ers. It was pretty awesome.
Answering the three questions posed right here yesterday:
Key #1: Containing Kaepernick
For the most part, the Rams did a solid job of this yesterday. The first time they played against the San Francisco rookie QB, he gashed the St. Louis defense over and over, escaping the pass rush and turning potential losses into big gains. Yesteray, the Rams kept him mostly bottled up in the backfield.
The one obvious breakdown came late in the game, on the 50 yard run that, I'm sure, gave every Rams fan watching a horrifying, if thankfully brief, bout of deja vu. His final rushing numbers for the day were 84 yards on 9 attempts, which obviously looks ugly, but mostly due to the lone big gain.
What the Rams were able to do to Colin Kaepernick yesterday was to pressure him, but then maintain that pressure and keep him in check, rather than allowing him to turn busted plays into momentum for the 49ers. Instead, they forced him into making bad choices and bad plays, and it made all the difference in the world.
An honorable mention should go out to the Rams' defensive performance in limiting Frank Gore, as well. I didn't make it a key to victory, but maybe I should have. Regardless, the Rams kept one of the best running backs in the NFL completely in check. Good job, brophuses.
Key #2: Go Balls Deep
This one didn't really happen. I thought the Rams would at least try to take their shots downfield to open up the passing game in the absence of their top target, Danny Amendola. There were a few attempts to go vertical, but not to the extent I had anticipated. (Or maybe just hoped.)
Chris Givens did have another big game. In fact, he was virtually the entire Ram passing offense on the day, collecting 11 catches for 92 yards. No other receiver had more than five receptions, and that was Steven Jackson.
Overall, it was a quiet, occasionally difficult day for the offense. Credit the 49er defense, if you like, or hold it up as just another example of how far this team still has to go. Either way.
I will say this for Sam Bradford and the Ram offense on Sunday: they didn't beat themselves. They didn't necessarily beat the 49ers, either, but they didn't beat themselves. Sometimes, that's enough.
Key #3: Turnovers, turnovers, turnovers
Generic though it may be, it also looks vaguely prophetic, doesn't it? In yesterday's game, neither team was able to get much going. Both defenses dictated the pace and tone of the contest, pretty much beginning to end. In fact, the 49er defense was even better than the Rams, as they did not allow a touchdown all day.
The difference, and the reason the Rams were able to win (besides the strong leg of Zuerlein, that is), was, you got it, turnovers. The game hinged on the very smallest of margins, a pair of ill-advised plays by the young 49er quarterback. The safety doesn't show up on the turnover line, but it works just like one all the same. The Rams put Kaepernick under pressure, bottled him up, and forced him into making a poor decision, to retreat all the way into his own end zone before attempting to heave a pass out that failed to make it to the line of scrimmage.
The other turnover, the real turnover, was a combination of inexplicable playcalling and brutal execution. Janoris Jenkins (in the midst of an awful, awful day, by the way), was absolutely Johnny on the Spot, picking the ball up and running it in for the Rams' only touchdown on the day, but that particular play was far more about San Francisco making a mistake than the Rams forcing the issue.
In the end, though, that's just as good. The 49ers made a key mistake, turning the ball over at a terrible time, and the Rams took advantage. They were in position to take advantage of that mistake because they didn't turn the ball over themselves. Because while San Francisco may have shut the Rams down for most of the day, they didn't compound the issue with mistakes. The 49ers arguably outplayed the Rams -- much as the Rams outplayed the Niners in San Francisco, actually -- but they made two big mistakes. That isn't many, two. But it was enough.
That's the story of the Rams and 49ers in 2012. They played almost 150 minutes of football, and only came up with one result in two games. And in the end, the Rams pulled out the win. Just the one. And they got it by doing...just...enough.