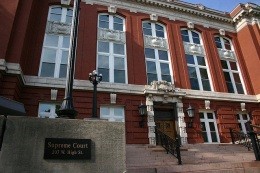 After listening to all 47 minutes of the oral argument that took place in Missouri's Supreme Court yesterday (which we've uploaded below), it all seems to come down to a single word: "project."

What's a "project"? How specific does a developer need to be about a redevelopment "project" before a city can use its authority under state law to grant tax increment financing (or a TIF)?

Developer Paul McKee thinks he's been plenty specific about his dream to revitalize more than 1,000 acres of the city -- or, at least, specific enough to deserve the $390 million TIF that the Board of Aldermen granted him in 2009.

North city residents such as Cheryl Nelson and Isaiah Hair, Jr., disagree, complaining that his pie-in-the-sky plan has caused their property values to drop.

Their lawsuit was finally heard by the robed justices in Jefferson City yesterday.

When lawmakers crafted the law, they left the word "project" pretty vague, but this lawsuit has focused like a laser on that one single word. At the circuit level, city judge Robert Dierker used a common dictionary to flesh it out, writing that a "project" should be "shovel-ready" and should list specific locations, actions and dates.

Now the question before the Supreme Court Justices is whether they should adopt Judge Dierker's additions as common sense, or conclude that he legislated from the bench and, therefore, went too far.

Arguing on behalf of the city, attorney Jerry Carmody told the justices that Dierker,

"was cynical and skeptical about whether or not this project could actually succeed. Many are. But...his cynicism and skepticism has no place in the analysis of whether or not the statutory requirements necessary to go forward with this have been met."

"What are you trying to protect against? What is the danger here?.... This is not a handout subsidy. It's a reimbursement. Nobody gets a single time until you do the work to the satisfaction of the city."


But Bevis Schock, attorney for the plaintiffs, countered that the danger was right in front of them:

"I represent people who've been harmed. And the blinders of our opponents to their loss is somewhat startling. It's undisputed in the record that Mz Nelson's house had a lower value because it was blighted by this ordinance. So who is harmed? My client is harmed!"


Listen to the whole oral argument below: