Kleenex-Makers Despair: Wash. U. Scientists Figure Out How to Halt Snot Production 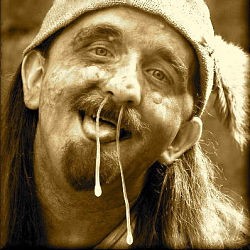 Snot has some uses. It makes a great punchline if you're telling a joke to a child between the ages of four and seven. It's also a good excuse for getting out of work or holiday parties. But it very easily becomes too much of a not-so-great-to-begin-with thing. Which is why a team of researchers at Washington University Medical School got to work trying to figure out what causes excessive snot production and how to stop it.

They think they've mostly succeeded -- at least, they've published their research in the Journal of Clinical Investigation and have even filed for a provisional patent. Could it be this thing is actually for real?

"There is good evidence that what kills people with severe COPD or asthma is mucus obstructing the airway," Holtzman said in a statement. "It's a huge unmet medical problem and is only increasing in this country and throughout the world."

Holtzman and his team decided to examine excessive production on a cellular level and figure out which molecules, proteins and enzymes were responsible. They came up with three culprits: an enzyme called MAPK13 which gives an extra boost to a signaling molecule called CLCA1, which tells a protein called IL-13 to turn on the major mucus-producing gene in airway cells.

The researchers figured that if they managed to get MAPK13 under control, they might be able to stop excessive mucus production.

Holtzman and his team realized they would have to build a new drug to work as an MAPK13 inhibitor. For their model, they used a drug that worked as an inhibitor of MAPK14, an enzyme that's similar in structure to MAPK13. The drugs fit into a "pocket" of the MAPK14 enzyme and prevent it from doing its work. The existing drugs, however were too big to fit into the MAPK13 pocket, so the team had to build a new drug.

"We sculpted the drugs so they're better able to bind in the MAPK13 pocket," Holtzman says. "And we showed that the new shape translates into more potent and effective blockade of MAPK13 activity. It's drug discovery that takes advantage of biology and chemistry, and it takes a very special team to do that."

But maybe the most significant part of Holtzman's research was that it was actually done on human lung tissue harvested from COPD patients instead of tissue from mice or fruit flies. No other creature, apparently, creates snot in quite the same way we do. (Aren't we lucky?)

And it worked! The research shows that the drug reduced mucus production in the cell cultures by a hundred fold.

"What we observed in isolated human cells translated to a devastating disease in real life," Holtzman explained.

The primary use for MAPK13 inhibitors so far has been for asthma and COPD, but Holtzman hopes that, in the future, they can work on other mucus-producing diseases, such as cystic fibrosis or the common cold.

"The big killer is COPD," Holtzman said. "But other extra-mucus conditions can also be life threatening. And we know from our studies that respiratory viral infections and allergies are potent activators of this same pathway for mucus production. Since the new inhibitors would be active in both the upper and lower airways, they could impact a wide set of respiratory illnesses."