It's Mailbox Baseball Season in Jefferson and Ste. Genevieve Counties 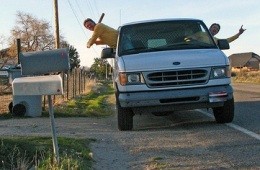 Sheriff's deputies from Jefferson County and Ste. Genevieve County have announced they're trying to track down the jerk(s) responsible for smashing mailboxes in their jurisdictions.

Early Monday morning, some deputies from JeffCo came to the 14000 block of Pallatin School Road, south of Festus, to see about a damaged mailbox.

But while they were there, several more area residents reported waking up to similar problem vandalism: mailbox damage by a "blunt object."

Then the deputies learned that their counterparts from Ste. Genevieve County to the south were dealing with a similar issue.

So far, a pair of sixteen-year-olds have been hauled into juvy (a third is wanted for questioning). Also, two seventeen-year-olds were questioned and released, "pending the application of warrants," according to the JeffCo sheriff's office.

Anybody with info can call the JeffCo Sheriff's Office dispatch center at 636-797-9999.