Want to Let Someone Down Gently? Wash. U Undergrads Have an App for That 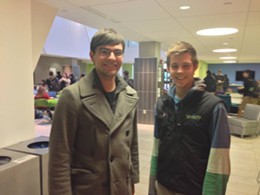 It all started on line at Steak & Shake. Washington University engineering students Philip Thomas and Andrew Hess were at the fast food joint last month with a female friend when a creepy stranger approached them and asked their friend for her number.

"We just thought there has to be a better way to deal with this," says Thomas, a senior From Cleveland, OH. And from there textreject.com, a site that gives people an entertaining alternative to giving out a fake number, was born. TextReject is kind of like the 1990s Rejection Hotline meets Texts from Last Night.

In the car on the way home, Thomas and Hess started talking about Rejection Hotline, a fake number service that Thomas remembered calling for fun as a kid (calling the number leads you to a snarky recorded rejection message).

"People don't really call each other anymore--now it's texting," Hess said. "We realized there wasn't a way to do that, no new format for it."

And so, after a couple days of programming, Text Reject was born. Your average conversation looks like this one from Houston, TX (713):

Poor soul: Who's there?

Hess and Thomas re-post the exchanges on their site and say they hope to bring in the kind of audience Texts from Last Night had in its heyday (Spring 2009).

So do they feel sorry for these suckers? "No not really," Thomas says. "It's all very much in good fun."

The engineering students say they haven't yet felt the sting of digital rejection themselves. "But that'll be the day when someone gives me a Text Reject number," Hess says. "Then I'll feel like we've made it."