The Kansas City Chiefs Have Disappointed a Fan to Death

However discouraged you may feel about Rams quarterback Sam Bradford or the St. Louis Rams in general, take solace in the fact that you're reading these words right now, because you're still alive.

A 81-year-old Kansas City Chiefs fan from Grandview (south Kansas City), he passed away on Wednesday -- partly from multiple sclerosis, according to his obit, and partly out of frustration with his hometown football team.
Quoth his obit: 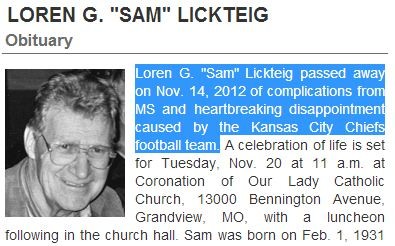