Hey Thieves: Stealing Smartphones Might Not Be Worth It Anymore 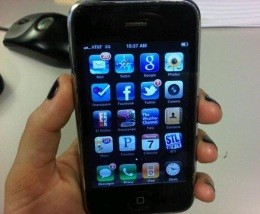 Hear ye, petty thieves: You can steal somebody's smartphone if you want, but by the end of next week, most users will be able to remotely deactivate their phones forever on the big networks.

So you're probably wasting your time. Unless your goal is just to be a real asshole.

The big cell phone providers -- AT&T, Sprint, Verizon and T-Mobile (among others) -- all got together last April with the FCC and the Major City Police Chiefs to tackle the cell-phone-theft problem.

And the problem was that cell phones retained resale value even after they were stolen.

A victim whose Android was stolen, for example, could remotely cancel service, but the thief (or someone else) could open up a new account on that same phone.

Thus, the black market has boomed. To shut it down, the wireless providers agreed on a set of voluntary deadlines to coordinate their efforts, and they recently hit a big one.

Around Halloween, the CTIA -- the wireless firms' global trade group -- announced that  the big providers had assigned unique ID numbers to every GSM smartphone in their own networks. What this has done is allow, for example, a Verizon customer to report a stolen phone and block it from being activated by a new Verizon customer.

By the end of next week, their databases are supposed to be compatible with each other, meaning that the victimized Verizon customer will be able to block his/her stolen phone from being reactivated through Verizon as well as through the other networks. (It appears AT&T and T-Mobile are already doing this for each other.)

This new system will reportedly cover some 90 percent of cell phone users.

It's surprising that the cell phone companies hadn't already figured this out before April 2012. Isn't it a principle of Econ 101 that if demand remains constant, but the supply of phones drops (due to post-theft deactivation), then they can either charge more for phones or sell more of them?