The Cardinals Get a New Look 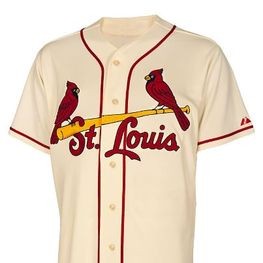 It's been quite awhile since the St. Louis Cardinals updated their look. They've had the exact same uniforms, home and away, since the 1998 season, one of the longer current runs in the major leagues.

Of course, that's not to say the Cards' refusal to change their uniforms is a bad thing, by any means; the chief reason the Redbirds haven't done a whole lot of fussing with their uniforms in so long is because, well, they haven't needed to. You don't mess with perfection, and the Cardinals' current uniform setup is pretty damned close to perfect. In fact, Uni Watch placed the Redbirds' uniforms at the top of the heap, best among all major league baseball teams.

Which is to say the new uniforms are going to have some very, very big shoes to try and fill.

The Cards will unveil their new unis today at a news conference at 10 am, and the club has already leaked pictures of their alternate uniform top.

That's right, sports fans, the Redbirds are getting in on the cash grab, adding a full-time alternate jersey for the first time. Most other franchises long ago went to multiple jersey options, with teams like the Mets and Rockies seemingly having a dozen different versions of their jersey available at any given time. Through it all, the Cards had refused to go down that road, preferring instead to go with home whites and road greys, no extra bullshit required. Oh, well.

As much as I might grouse on basic principle, I do have to admit I love the retro direction of the alternate jersey, which features the old style red trim from some of the classic Cardinal uniforms. It's also the first time since 1932 that St. Louis will be featured on the front of the jersey, rather than Cardinals, which is kind of neat. Eighty years is a long time.

Personally, I'm hoping the full set has the same feel to it, hopefully without looking too very gimmicky. The Redbirds have some of the most iconic uniforms in the history of the sport to draw on, so let's all cross our fingers they did it right.

As for how I would have done it myself, I still would have liked to steer clear of the alternate jersey. Home whites with the red Musial-era trim, Birds on the Bat with Cardinals in script, yellow bat. Road greys, same red trim (I also would have considered pinstripes; they're not really traditional for the Cards, but I'm a serious sucker for pinstripes), do the St. Louis script thing there, and go with the old style black bat instead of the yellow. Boom. Done, and done right. Red hats home and away both, or go with the blues for the road uni if you must.

I'm a little more excited than I should be, I think, at the prospect of baseball discussion and fashion intersecting here in Cardinal Land over the coming days and weeks. Don't you all judge me.

You know what? In the end, I'll be satisfied -- thrilled, even -- if the Cardinals just get rid of those ass-ugly Sunday hats they currently sport. Play in uniforms made from aluminum foil with multi-colored Marlins style lettering if you have to, I won't mind. Just get rid of those fucking Sunday hats and you won't hear a peep from me.