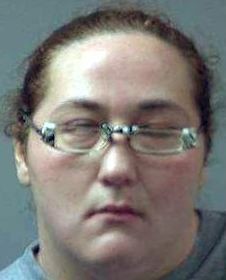 No, not for her ultra-eerie mugshot (see right), but rather, for allegations that she, her boyfriend and another fella sexually abused three girls - ages 5, 3 and 7 months -- while she was supposed to be babysitting them at a trailer park near O'Fallon.

She was sentenced to ten years in prison on Thursday.

Russell, 31, has entered what's called an "Alford Plea," meaning that she hasn't admitted guilt, but has admitted that the prosecution has enough evidence to convict her.

Specifically, she pleaded to three counts of statutory sodomy relating to only two of the girls - the five-year-old and the seven-month-old.

We're going to repeat that: It was a seven-month-old.

The neighbor -- 26-year-old Billy Bunch Jr., -- has already admitted to statutory sodomy and got sentenced last week to 15 years in the slammer.

Russell's live-in boyfriend, 27-year-old John Thomas III, is up next to be sentenced in December. This should be the big one: He's been accused of performing acts on the older girls and raping the baby (while Rebecca Sue Russell held the baby in place).