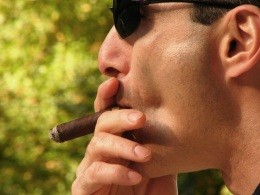 The Eighth Circuit Court of Appeals ruled against Clayton resident Arthur Gallagher last Thursday in his quest to overturn that city's ban on smoking in public parks.

A retired vineyard owner, Gallagher enjoys lighting up stogies in Concordia Park across from Kaldi's Coffee on Demun Avenue — "ecstatically" so, he even claimed in court.

To his dismay, the Clayton smoking ban prohibited smoking in public parks. It did carve out a general exemption for sidewalks (and streets and alleys), but not park sidewalks.

With the help of conservative attorney Bevis Schock, Gallagher filed suit in federal district court in March 2011. The pair alleged the ban on park-smoking was unconstitutional for several reasons.

In the most interesting chunk of their argument, they called smoking a "fundamental right," citing peace pipes as evidence of "tobacco's ancient traditions in American history."

They also called smoking an "intimate part of life" on the same plane as having sex and getting an abortion. (Can you do those things in a park?)

The alleged right to smoke in public is not so deeply rooted in the Nation's history and tradition, and it is not implicit in the concept of ordered liberty. As such, it does not fall within the "liberty" that is specially protected by the Due Process Clause.

See You in Court! Smoking