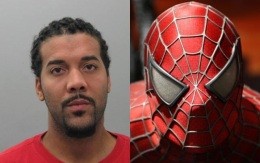 A North County man is locked up right now on charges that he robbed a Domino's delivery driver on November 9, the St. Louis County Police say.

Yes -- another robbery involving a pizza guy. Is this St. Louis' most dangerous job?

Richard D. Whitehead, a 31-year-old from the 300 block of Chalmetta Drive in Hazelwood, has been charged with first-degree robbery and armed criminal action.

Late on Friday night, the cops say, a Domino's driver reported that he'd taken food out to the 1500 block of Marbella Drive. At about 11:20, the driver later told police, the suspect -- wearing a Spiderman mask and wielding a small nickel-plated handgun -- robbed him of two pizzas and a small amount of cash.

Just last week, an Imo's driver was murdered for a few pizzas and a cell phone.

In September, a Papa Johns deliveryman was forced by robbers to give up his vehicle late in King's Oak.

Last May, a different Imo's driver was murdered in Hillsdale.

Now, the county cops are sending undercover officers into he field as delivery drivers.