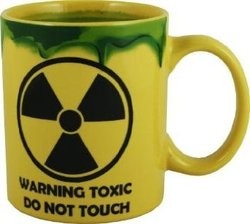 Apparently, some of the animals at the zoo can be found outside the cages.

At least two workers at the St. Louis Zoo have complained that someone intentionally put chemicals in their beverages. A supervisor and his employee in the maintenance department both say they got a nauseating shock after leaving their drinks out while working, then going back to take a sip. One says it was clear that someone had dropped a reddish, oily substance into his coffee cup.

They call it a "poisoning," while a zoo spokesperson says that's taking it too far.

According to the Post-Dispatch, in late September Regina Haywood left her can of Pepsi on a file cabinet while doing zoo rounds. When she found it again and took a sip, she says it burned her throat and stomach. She had her supervisor, John Huffstutler, try it as well, and says that he tasted something strange also.

The odd thing is, Huffstutler was next. He told the P-D that three weeks ago he doubled over after trying his cup of coffee and had to go to a clinic. He returned to work, but was feeling sick enough later that night to go to the ER.

Fox2 tracked down one other employee -- 80-year-old Irvin Jordan -- who says he went to the hospital for four days recently, though he couldn't say for sure whether he thought he'd be poisoned.

Zoo officials say they had both the can of Pepsi and the mug of coffee analyzed and found trace amounts of motor oil in the coffee. They determined it was not enough to hurt anyone and or warrant police involvement. Nothing was found in the Pepsi.

"There's been no evidence at all that there's been poisoning, from both the medical reports that we've had access to and the lab reports," says zoo spokeswoman Susan Gallagher. "They are alleging something that the facts don't bear out."

She adds that the zoo has already investigated and interviewed the entire staff, and is satisfied that the matter has been dealt with.

According to Poison Control, drinking motor oil isn't that harmful, but will cause nausea and stomach pain. The real crime would be if the culprit added a dollop of motor oil, then told a really funny joke. Breathing in motor oil causes all kinds of horrible problems.

Who is this serial spiker? We'll update if there ends up being more.