Another Mountain Lion Sighting - This Time Near Branson! 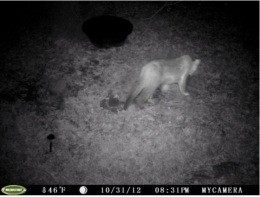 And so it continues.

The Missouri Department of Conservation has just confirmed the fourth Mountain Lion sighting in the last two months. All have occurred in southern Missouri.

The most recent photo was taken by a wildlife camera in Taney County, near Branson, on Halloween night.

We know mountain lions like to roam -- scientists have confirmed that one big cat traveled from South Dakota to Missouri to Michigan in 2010 alone!

But could all the recent Show-Me State sightings be of the same animal?

The MDC says it can't confirm it's the same animal without DNA evidence. But the map below shows how close together the sightings have occurred.  From left to right, they occurred on Oct. 31, Sept. 10, Oct. 10, and Oct. 27. (Click here to play around with it in Google Maps.)

If it's the same cat, he would've been at the far right point and walked to the far left point in only four days (although, N.B., locations are approximate.)

Whatcha think? I think it's the same one.