No MO Money For a Former Bellwether 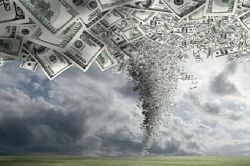 Once upon a time, Missouri was the bellwether of the Presidential elections. You could always count on us to pick the winner. Remember 2008 when Barack Obama rallied beneath the Arch and even John McCain paid a few visits here? Oh, those glorious days. But then, by just .1 percent of the popular vote, we gave our eleven precious electoral votes to McCain, who ultimately lost. And, just like that, we lost our precious bellwether status. (And also one electoral vote.)

Now, this year, every pollster has predicted we'll give them to Mitt Romney. It's like our red-ness is a foregone conclusion. Which means that even though we still get a shit-ton of campaign ads every time we dare to turn on the TV, they're only from locals. The whole Presidential thing has just passed us by.

Maybe it's just like those Rules ladies and our grandma said: If you're a sure thing, nobody's going to want to buy you dinner.

Back in 2008, we were one of the most popular states, lavished with money and attention. The Obama campaign poured in more than $11.3 million into Missouri, but McCain won it (barely) with a mere $9.4 million. Such a bargain!

This year, even though Obama and Romney have waged the most expensive campaign in history, with rumors that the candidates and their friends will have poured in more than $4 billion by the time they're done, Missouri's not even close to the most-wanted list. NPR's Adam Cole compiled a whole bunch of data on campaign spending between April and October of this year and then crunched the numbers to figure out where the Democrats and Republicans had done most of their spending. Turns out Ohio and Florida got the most love by far ($28.3 million and $38.9 million respectively) -- although, because Nevada and New Hampshire have smaller populations, the two campaigns ended up spending more money per person in those two states. (In this case, a "person" actually means a voting-aged adult. In New Hampshire, each vote was worth $5.35. In Nevada, it was a whopping $5.94.)

By contrast, Obama has spent $5 million in Missouri this year and Romney $7.2 million.

But even though we've been ignored by the Presidential campaigns, we've been spending pretty lavishly on ourselves. Claire McCaskill's campaign has raised $19.4 million and spent $17.4 million. Todd Akin has raised $4.6 million (only $1.6 million between the time he first opened his mouth about "legitimate rape" and the end of the crucial third quarter in September) and spent nearly all of it. He got a recent boost courtesy of reclusive, chess-loving billionaire Rex Sinquefield, who donated $200,000 to a PAC called Now or Never PAC which, in turn, gave $800,000 to help Akin through the last week of his campaign.

Can you imagine if that money were actually funneled into something more useful than TV ads?