Mark McGwire Gamble Paid Off For Cardinals; Will Successor Prove The Same? 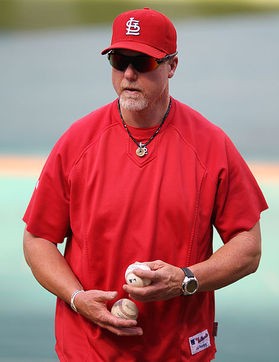 So apparently it's become like a thing now for Cardinals sluggers to leave the team in the offseason and head for Southern California. Last year it was Albert Pujols, aka the Second Greatest Cardinal (and who will never, ever reach number one on that list), leaving the Redbirds and taking his talents to Orange County. And now this offseason it's Mark McGwire, aka Big Mac, aka The Steroid Dude We Totally Don't Care Did Steroids Because He's Our Steroid Dude, Dammit, moving on from the Cardinals to take a position with the Los Angeles Dodgers.
Admittedly, Big Mac doesn't leave quite the same kind of hole on his way out the door, as Albert's departure left a gaping void in the middle of the Cards' lineup (though it turned out they filled that void pretty well, actually), while McGwire simply leaves the Redbirds without a hitting coach. All the same, I'm thinking the Cardinals are going to miss McGwire in the coming years.
Maybe quite a lot.
This whole thing presents me with an interesting conundrum. I've gone on record multiple times in the past as being agnostic at best about the impact of coaches at the major league level. And I still believe that, to be honest. The Cardinals have had great offenses the last couple years because they've had great hitters up and down the lineup, not because they've had Mark McGwire in the dugout telling said great hitters what to do.
On the other hand, though, I do think Big Mac has had a lot to do with the Cards' offensive success. He isn't teaching the hitters how to hit, but I do believe he's helped to set the tone for the hitters. The philosophy, perhaps. This is a disciplined, intelligent bunch of hitters who don't often go outside the strike zone and get themselves out. Even during the rare times this past season when the Redbird offense didn't really click on all cylinders, the problem never seemed to be a breakdown in the overall approach. There were times when the hits just didn't come at big moments, but you never felt like the hitters were just up there flailing, with no idea of how to approach the situation.
Of course, good hitters are largely good hitters because they already have a pretty good idea of what they're going most of the time. With only very, very rare exceptions (guys like Vlad Guerrero), good hitters go to the plate with a plan of attack already formulated. (And actually, to be fair, I'm sure Vlad did too; his plan of attack was just, "Well, that guy's gonna throw the ball, and then I'm gonna swing, no matter what. And probably hit a home run.") So when you have quality hitters, you're probably going to have quality plate appearances almost by default.
Still, the coaching staff is responsible for the overall philosophy of the team, be it on the pitching or hitting side, and McGwire was, I think, very good at communicating that philosophy to the Cardinal hitters. Particularly the younger ones, guys like Allen Craig or David Freese, both of whom really blossomed under Big Mac's guidance. I admire the approach McGwire teaches, and I worry losing him will, in fact, result in the loss of an important voice.
My other concern is the fact I'm just not at all sure I trust Mike Matheny to make a good decision as to Big Mac's replacement. It appears at the moment John Mabry will be the next hitting coach for the Redbirds, largely because the team seems to want the maximum amount of incest possible in their hirings, and I have no reason to believe Mabes will be a bad hitting coach. I also have no real reason to believe he'll be a good one, either; Mabry at this point is pretty much a complete unknown to me.
But Matheny, I just don't really trust in these matters. He's a really nice guy, the players seem to love playing for him, and I think he's very good at relating to his charges. That being said, I thought he was way out of his depth last season when it came to tactical decisions, and nowhere was that more obvious than in his insistence on playing small ball, bunting constantly to the clear detriment of the offense. When a manager clearly has no clear concept of the value of an out or run scoring expectancy or pretty much any other aspect of how to go about scoring runs, why would you believe he's any better at identifying what goes into making a productive philosophy regarding individual at-bats?
For right now, I'm just going to hope we don't see John Mabry (or whoever), in spring training next year unveiling his manifesto by putting Matt Holliday in the cage for three hours a day to practice his drag bunting ability, or telling the hitters they're really just going to tire their eyes out if they stand in the box watching too many pitches so they'd better swing early.
As for McGwire, I'm glad he's back in baseball, and I'm glad he was part of the Cardinal family again for awhile. He's moving on to be closer to his family (he and his wife have young triplets), which I can't blame him for. All the same, I hate to see the guy go, if only because I know the alternative could very well be so much worse.