Advice for Police Chiefs: Evidence Should Be Gathered, Not Enjoyed 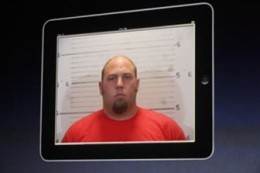 Yesterday, 27-year-old Dallas Hill -- police chief in the small town of New Athens, Illinois -- was charged with three felonies on the accusation that he snatched an iPod and iPad from the evidence room "for his own personal use" over the summer.

The items, which had been seized in a commercial burglary and forgery case, were valued at over $500, according to the charging documents filed Monday by St. Clair States Attorney Brendan Kelly.

The St. Clair County Sheriff's Department initiated the investigation about a month ago, after anonymous complaints started filtering in. Captain Steve Johnson and a colleague interviewed Hill, other officers and citizens. They also had a forensic analysis done on the two Apple products.

Cpt. Johnson informed Hill of the charges Monday, and Hill surrendered himself at the St. Clair County Jail and posted bond.

Hill faces two counts of misconduct and one count of theft over $500.

Johnson concluded in a written statement:

"Whenever the badge is tarnished, which represents our oath of honor, it is very troubling for all of law enforcement. It should be noted these criminal charges are not representative of the entire New Athens Police Department. Their Officers fully cooperated with this investigation."