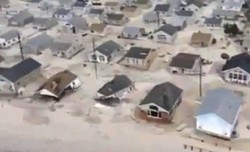 The Missouri National Guard is hosting an interesting, weeklong training starting this Saturday called "Vigilant Guard." The exercise imagines a catastrophic earthquake that ripples through the New Madrid Seismic Zone -- which could badly damage our fair city.

"The initial earthquake and anticipated aftershocks would be devastating to the rural areas of southeast Missouri ... An increase in damage to man-made structures such as large buildings and bridges nearer the St. Louis area can be anticipated as well," a release about the event reads. "The one-week exercise will bring together all of the Missouri National Guard's capabilities as well as Guardsmen from Kansas, Iowa, Oklahoma, New York . . ."

Waaaait a minute -- New York? Don't they have a catastrophic doohicky on their hands right now?

Someone at Wired certainly though so. They called up the New York State Division of Military and Naval Affairs and found out that, yes, as of Tuesday night, 450 New York National Guardsmen were still scheduled to leave the Hurricane Sandy clean-up effort behind and deploy to Columbia.

"The troops were previously declared unavailable to help New York recover from the state's biggest hurricane in centuries. Instead, they were assigned to fight a fake disaster," the Wired post reads. "Until Tuesday, that previously scheduled drill took precedence over the real-world catastrophe that struck the East Coast. It was declared a bureaucratic near-impossibility to redeploy hundreds of guardsmen at a moment's notice, even at a moment when so many are in need."

However, hours after Wired contacted military affairs, the decision was made to keep the troops in New York. We asked a spokesman for the agency, Eric Durr, whether common sense or face-saving prevailed.

"The decision was made to go ahead, to deploy to the exercise, but at some point we may say 'no.' We continued to plan, then last night the adjutant general made a decision that he wanted to keep the 450 soldiers that were part of this exercise here in New York in case he needed them," says Durr. "If we need more, here we have a group of individuals who were already planning on being away from home."

Durr says there are no immediate plans for the troops, but if needed they'll likely join the 2,500 troops already hard at work distributing food, checking damaged or submerged buildings, and helping local law enforcement navigate high-water areas with their tanks.

Fret not, fellow Missourians. Operation Vigilant Guard is an ongoing training program and New York will have another chance to practice saving our asses.