[VIDEO] Momo the Missouri Bigfoot is Back! (Or So the Tourism Bureau Claims) 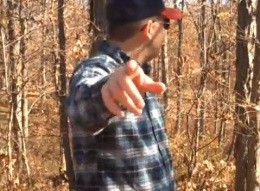 With an an endearingly bad video posted on YouTube, VisitMo -- our state's tourism bureau -- is suggesting that "Momo," the Missouri monster, actually exists.

There's no question that a monster sighting did capture the imagination of Mississippi River towns from here clear up to Hannibal back in the early 1970s. That part, at least, did happen.

According to legend, Momo was first spotted in July 1972 by two young boys playing outside in the town of Louisana.

The boys claimed they were approached by a six- or seven-foot-tall beast that had no neck, a hirsute body and emitted a foul odor. It was clutching a dead dog, flecked with blood.

Soon, other sightings were reported nearby. UFO enthusiasts came to investigate. Someone even wrote a country song about it that played on the radio. (For more background, see here and here).

Fast-foward forty years: VisitMo decides to do a video interview with a certain Andrew Stephens who says he encountered the beast in July 1997. As he tells his story....well, watch this!


The Tourism bureau writes that it knows "this much" about the episode:

- No one else was in the area; it's private property
- All members of our crew were accounted for
- Stephens rode to the area on a pink Vespa, meaning he couldn't have taken a "friend" to scare our crew

Does this image conclusively show evidence the Momo exists? That's up to you to decide. - As far as the VisitMO team is concerned, it does.


So yeah! That's what Missouri has to offer, America! Wine and Bigfoot.