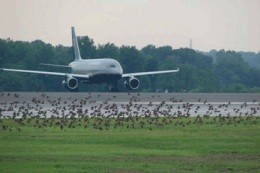 Last Friday evening, American Airlines flight 1186 roared out of Lambert International Airport, headed for Chicago-O'Hare. But by the time it hit 5,000 feet, it had collided with a bird, and had to turn back (this has happened at Lambert more than a couple dozen times so far this year).

Here's how it felt -- more like "smelt" -- in the cabin, according to passenger Melissa Meinzer (a former RFT staff writer who now reports for Missouri Lawyer's Weekly; she was trying to get to Boston.)

Daily RFT: So how did you know the plane hit a bird?

MM: Almost immediately after takeoff, the cabin filled with an acrid, panicky reek of burning plastic.

Gross. Did people freak out, like in the movie Airplane?

No one started audibly praying a rosary, but there were some restrained panic-faces exchanged between strangers. And human mortality may have been contemplated by a few parties (me).

So then what happened?

No more than five minutes into the flight, the captain came on and told us he was aware of the, uh, situation, and that we'd be turning around and landing. Highly inconvenient, but way better than assured fiery destruction.

After we were safely earthbound again, the flight attendants told us that a mechanical crew was going to board the plane and find out what the problem was.

Those folks said it was probably a bird strike, and that we might be able to be airborne again in minutes. They couldn't verify the safety of the plane to their satisfaction. So we got off and boarded another plane bound for Chicago, where I ran to my connecting gate and missed my flight to Boston by minutes.

That's too bad. What have you learned from this ordeal?

I am certain that I actually caused the entire kerfuffle through forgetting a key element of my travel ritual.

In protest against the flip-floppification of our nation, I always approach air travel as something glamorous to be celebrated. I generally fly in vintage-inspired tailored dresses and always include a particular ring and about seven strands of pearls, which I forgot for this flight.

So your failure to wear pearls caused the bird to hit the plane?

I remembered the pearls for my return flight, and managed to get home from Boston, moments ahead of Sandy on what may have been among the last flights off the East Coast, without a hitch.