A Haunting on Cherokee Street: What's Up With Those Flashing Windows?

Passersby could be forgiven for thinking there's something a little spooky going on at the corner of Cherokee and Jefferson streets. Every night for the last year and a half, the windows of the building on the southwest corner light up in different colors, changing much too quickly to be the work of light-switch flicking ravers.

With Halloween upon us, it seemed like an ideal time to ruin everyone's fun with the stupid truth.

Turns out nothing is at work here but the Ghost of St. Louis Future.

Prominent Cherokee Street property owner (he owns the Nebula Coworking building and is landlord to at least one RFT staffer) Jason Deem stepped forward as the display's mastermind after folks started asking questions about the lights on Reddit St. Louis.

Deem says that inside the space is a total disaster -- home to at least a few pigeons and squirrels -- and he knew that it was going to take a long time to fix. In the meantime, it bummed him out that the upper floor windows would stay dark.

"We kind of wanted to make it look alive and set apart. We didn't want it to look like another vacant building," Deem says. 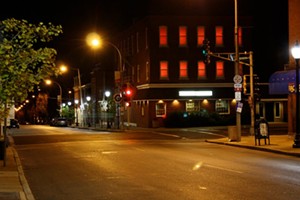 So he pasted the windows with tracing paper, hung a multicolor LED stage lights in each (similar to this one), and connected it wirelessly to an iPad that lives at Nebula. The iPad has an app the controls the colors, speed, and patterns, which Deem says he tries to keep seasonal. About now things are looking pretty pumpkin-y up there.

"A lot of the second floor spaces on Cherokee have been vacant for a long time and I think it lightened up the area to see those lights coming on," he says.

Eventually, Deem says, the space will be fully renovated and become a hospital hostel (Note: Whoops! Error of mishearing). But that's still at least a year and a half off.

Until then, shine on you crazy demons. Click through for a bunch of pretty gorgeous shots of the colors in action.