The Best Ways to Watch "Hurricane Sandy" Roll in From Afar

If you've turned on the TV or gone on the internet today, you might know that the Eastern Seaboard is being battered by a freak hurricane, obnoxiously aptly named "Frankenstorm".

Meteorologists and TV newscasters are running out of terrifying things to say about this bad boy, Hurricane Sandy, as it makes landfall in New Jersey this evening before setting out on a path of destruction that may cause record damage.

Maybe you've already grown weary of seeing cable news correspondents needlessly battle torrential winds, or b-roll of abandoned city streets. But if you're interested in keeping tabs on Sandy, we've rounded up a few sites that offer far more interesting views of the hurricane that threatens to blow away Manhattan. From East Williamsburg hipster musings to mesmerizing wind map technology from Google programmers, read on for the latest, greatest and strangest in hurricane-watching.

The New York Times' View From Above 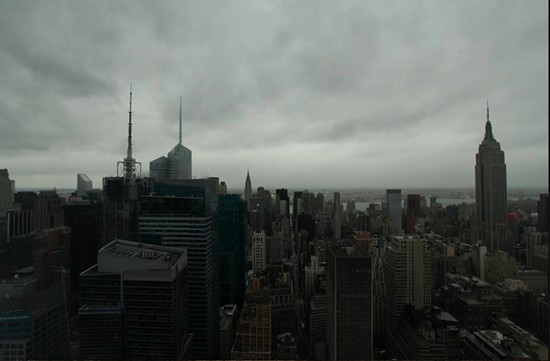 From the folks who brought you the hawk cam, among countless other Pulitzer-worthy "cams", comes streaming video of the storm as it approaches Manhattan. The NYTimes has affixed a camera to the top of their premo Midtown skyscraper headquarters. This morning things are looking pretty placid, but if Times Square blows away, you'll be the first to know it. Wind Map from Google geniuses

If you only utilize one meteorological gauge for the rest of your life, make sure it's this one. This wind map, developed by Fernanda Viégas and Martin Wattenberg, co-directors of Google's "Big Picture" data-visualization team in Cambridge, MA, combines excellent design with rich data to tell a story Anderson Cooper--no matter how much water he stands under--could never tell.

The image above is static, but their animated infographic, which charts windflow across the country, is truly breathtaking in its simplicity and elegance.

Wattenberg describes the mystifying poetry of the wind in a blurb on the site:

An invisible, ancient source of energy surrounds us--energy that powered the first explorations of the world, and that may be a key to the future. The wind map shows the delicate tracery of wind flowing over the US.

Next: A New York you'll almost never see. Metropolitan Transit Agency's Flickr stream The MTA, New York's version of MoDot, shut down all of the city's subways and buses today in anticipation of Frankenstorm. The public transit agency decided to let city folk know what they were missin' (no lines to buy a Metrocard at Grand Central?--normally wild horses wouldn't dissuade a New Yorker from seizing that opportunity) by posting photos of empty transit stations to Flickr. The photos are strangely poignant and eery. 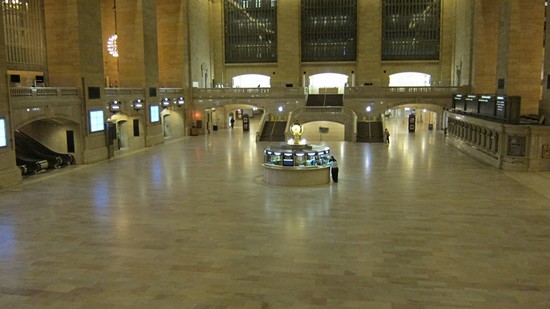 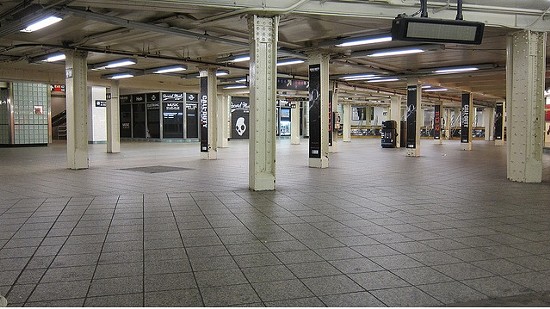 Next: who is the Weather Channel's baddest O.G.? Jim Cantore's Twitter feed

The Weather Channel's Jim Cantore is weather's original bad boy. No one's ever called him the Storm Whisperer (some opt for "storm chaser" but any fool can do that) before, but we think it's the perfect street name for this bad ass meteorology mofo.

Check his Twitter feed for insightful live commentary of the entire Eastern Seaboard. Tweets like these don't just fall off of hurricane-ravaged trees.

Next: What happens when you lock up a few thousand hipsters with nothing but instant coffee, Adderall, their MacBooks, and a bunch of other pricey electronics?

Because who doesn't want to know what Williamsburg douches hipsters are thinking 24 hours a day, seven days a week? They seem to think we all do.

Thought Catalog's liveblog of the storm is curated by his supreme doucheness himself, Tao Lin and it's full of fixed-gear-bicycle-laden gems.

Kick back with a PBR, remember nostalgically--and with a touch of bitterness--how you lost your virginity, and enjoy.

9:06AM, South Williamsburg, Brooklyn I just looked outside again and to the naked eye, it appears that it's not raining anymore. Sandy is starting to remind me of myself mid-nervous breakdown. Crying in Morse Code. Stop go, stop go. Sandy? Babe? You OK out there? Let's talk about it. (Stephanie)

9:54AM, Hyattsville, MD Wind just picked up. Smoking a cigarette on the deck. Drinking instant coffee and hot chocolate from a 600ml mason jar. Feel somewhat paranoid semi-dead tree near the kitchen will crash into the house. Branch that split and crashed into neighbor's house during last storm seems ominous. Keep thinking, Would be cool if Google Earth had a feature showing lightning strikes as little electric flashes as they were recorded. Made plans with high school crush to drink beers in the street when the wind dies down in lieu of Halloween plans having been canceled. Parents are watching Fox News instead of hurricane coverage in the room where I sleep.

3:24AM, Murray Hill, Manhattan Said something to Katie about us having already ate all our food (meant to last until Wednesday) & both laughed. She was, at the moment, melting raw/cashew-based ice cream in sink water so we could eat it melting on top of Fig Newman's, which we just did & both liked a lot. We've also eaten 2 boxes of cereal, I think, despite being both on Adderall. Almost nothing from my "Hurricane Sandy Shopping-Spree" remains. Currently both drinking beer. Probably going to sleep ~4-10 hours. Will be back tomorrow. Good night! (Tao)

8:55AM, Washington DC Words cannot express how happy I am that we're keeping this live blog going. There's no real storm yet, we started this thing probably 20 hours too early, none of us have any news to report. There is no reason for this live blog to continue, other than the massive amounts of Thought Catalog pride and ego at stake. And you know what, that's enough. You think a little something like "nothing happening" is going to stop us from our live blog? Are you serious? We're Thought Catalog writers, Sandy. You think we have places to be? Things to do? You must have us confused with other people. Sitting alone in the dark with nothing but our feelings? That's not "sitting out a hurricane" for TC writers. We call that "Monday." And we're going to keep blogging until SOMETHING happens, god damnit. YOU CAN'T BEAT US, SANDY. WE'LL GO FOR DAYS. WEEKS. MONTHS. I'm camped out in my apartment with a 24 pack of Ramen and four gallons of water. Let's see who blinks first. (Nate)