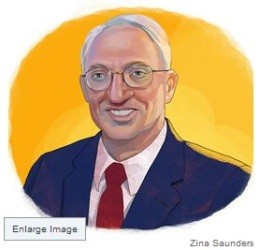 He was the subject of the yesterday's  "Weekend Interview", in which he said he's put on hold his dream of replacing income taxes with sales taxes in Missouri because voters haven't cottoned to the idea. But looking ahead to 2014, he then revealed what the WSJ calls "his most ambitious ballot initiative to date": Getting rid of teacher tenure.

[Sinquefield] says the initiative polls very well, particularly when tied to merit pay. But he knows that "teachers unions would come in from across the country to oppose it. This will be a brutal battle."

Now, there's no question Sinquefield genuinely cares about education -- why else set up a scholarship fund for 2,000 public school kids to go to private schools? Private schools are generally better; scholarships don't deprive the public system of funds because the parents still have to pay taxes anyway; and fewer public school pupils should mean, theoretically, a better teacher-student ratio.

So, at the very least, he cares whether kids in the Show-Me State are learning. But many folks vehemently disagree with his solutions for improving the public system, not least the teachers unions, who will fight tooth and nail to protect their tenure.

What will he need to ward them off? An ocean of cash. He already has that, by all accounts. But here's something else Sinquefield told the WSJ yesterday: He predicts that upon the selling of Dimensional Fund Advisers, the investment firm he co-founded, he'll be swimming in it:

"When Dimensional gets sold," he says, "that's when I'll really be able to give money away."


Oh lord. As the great Midwestern sage Mark Twain might've put it, Missouri's public policy in the Sinquefield era may prove to be the best public policy money can buy.