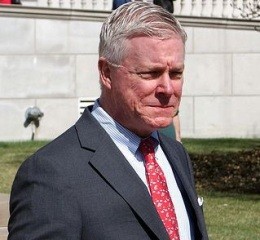 The reason: A United Nations-affiliated group will be observing the November 6 general elections here in Missouri and several other states.

"have no business in Missouri and should be kept out of our elections.... I think the agenda is to suppress votes in conservative areas. And we're not going to stand for it in Missouri."


Well first of all, Lieutenant Gov'nuh, "international observers" explicitly do have business being at polling places under Section 115.409, Revised Statutes of Missouri.

And let's be clear who these observers are: They're from the Organization for Security and Cooperation in Europe (OSCE) of which the U.S. is a member. In fact, it was the administration of George W. Bush that invited them to come over and watch the 2004 general election (when memories of the 2000 election debacle were still fresh -- recall Florida's "hanging chad").

Since then, OSCE has been back several times -- including a trip to Missouri in the last general election in 2008. (You were around then, weren't you Mr. Kinder?)

That hasn't stopped Texas from freaking out about 2012. The attorney general there has threatened to arrest and prosecute the observers should they step too close to polling stations.

This is what Texas is worried about this year:


a core team of 13 experts, from 10 OSCE participating States, based in Washington D.C., and 44 long-term observers deployed throughout the country. These are the sixth United States elections the Office has observed, without incident, since 2002.


By the way, most of these observers hail from the terrifying, autocratic and conspiratorial countries of Denmark, France, Germany and (gasp!!!) the United Kingdom.

Conservative bloggers are passing around a document that purports to show where the observers will show up. If it's authentic, then Missouri will have two OSCE observers in Jefferson City.

That's TWO, in the entire state.  It won't be hard for Kinder to keep an eye on them, especially if they ever hang out in the same room.

Now even John Fund -- a columnist for the conservative National Review Online  -- thinks the paranoia has gotten out of hand:

There are legitimate concerns about the election monitors, but I think the bashing of foreigners is a bit much.... In the past, the OSCE observers have issued solid reports that relied neither on hearsay nor on anecdotal evidence.


And Fund knows what he's talking about; he just published a book on voter fraud.

Peter Kinder, meanwhile, seems to be worried about this out of a deep-seated fear of the UN in general. On Loesch's show, he went on to say:


every week [someone from Obama administration] is over at the UN planning to sign away our sovereignty, planning to give up our gun rights...or [to] submit us to a regime of global taxation."

This is a person who's running again for statewide office -- lieutenant governor, to be exact, which under Missouri's constitution has no significant duties. Probably why he's found time to peddle these far-fetched conspiracy theories on the radio, instead of finding useful things to do.

And that -- not a pair of international observers -- is a legitimate worry to have when you're at the ballot box next week.