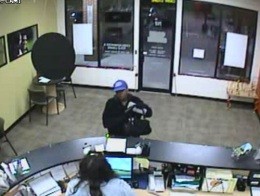 You often see murder victims' families on TV, grieving. Less often do you hear about robbery victims, months after the fact. They struggle with their own kind of psychological demons.

A female clerk from a Southern Illinois a payday loan shop recently penned a compelling "victim's impact  statement," which a federal judge read aloud at the sentencing Thursday of 32-year-old Chrice Shunta Combs of St. Louis.
Combs had admitted to robbing three branches of The Cash Store (in Wood River, Highland and Chester) in 2010 while brandishing a gun and a big ol' knife.

On Thursday, before sending Combs away for 16 years and ordering her to pay $10,125 in restitution, the judge read aloud the clerk's statement:

I replay that day in my mind over and over daily.  I will always remember the terror of having a gun pointed at me.  I stood there, a foot away from the end of a gun, wondering what it was going to feel like when she pulled the trigger, wondering if I would survive, wishing I would have held my daughter just a little longer before I dropped her off at daycare just 20 minutes earlier. Not only did we endure the horror of being threatened with a gun, she also had a knife, a very large, very real knife. . . .  The year and a half after the robbery . . . was torture, every customer to me was another potential robbery. I scanned every single face of every single customer with my hand on my panic button thinking it was going to happen again."


Obviously, it could've been a LOT worse, of course. She could've watched people get gunned down or stabbed. She could've been sexually assaulted and had to relive that monstrosity in her head. But it's worth remembering, after hearing about so many robberies in St. Louis, that robbers don't just make off with money. They make off with certain victims' peace of mind.