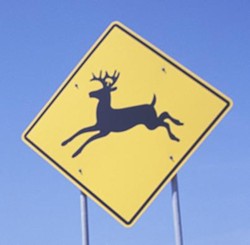 West Virginia leads the nation in something. And, no, we're not talking about obesity or smoking or party schools. West Virginia is the most likely place in America for motorists to crash into deer!

According to State Farm insurance claims and statistics from the Federal Highway Administration, drivers in the Mountain State have a 1 in 40 chance of mowing down Bambi this year.

And as fascinating as that is, what's perhaps most interesting is how closely the map of the states with the greatest likelihood of deer-vehicle collisions resembles the nation's political divide.

Below are the red and blue state results from the 2008 election. 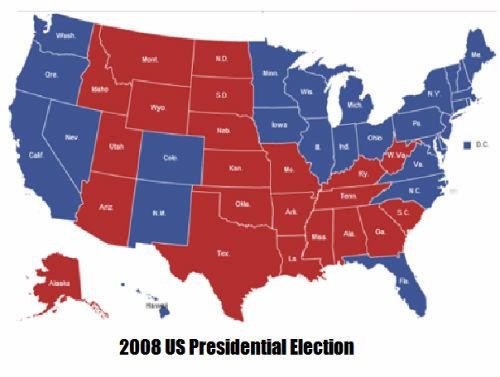 And here is the map indicating states with the greatest odds for deer-vehicle collisions: 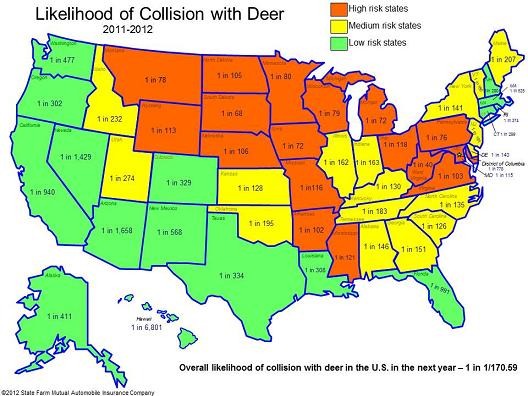 No, it's not perfect, mind you. But delete the liberal states of the Upper Midwest from those with good odds for deer-vehicle accidents and add to that list Texas, Alaska, Arizona and Louisiana and -- bingo! -- you got yourself a pretty close representation of how the Democratic/Republican vote shook out in 2008.

But which party (based on deer collisions) is trending upward, allowing them to win the White House this year? For that we turn to the numbers.

State Farm reports that the number of deer-vehicle accidents nationwide increased 7.7 percent last year -- a trend that could favor Republicans. But not so fast! The same survey has both Florida and Ohio losing ground in this year's ranking for deer-vehicle collisions -- a sign that could indicate Democrats will pick up precious electoral votes in those battleground states.

Missouri moved from No. 18 to No. 15 in this year's ranking of deer-vehicle collisions, keeping pace with its shift toward becoming a solid red state. Show-Me State drivers, by the way, have a 1 in 116 chance of picking whitetail carcass out of their radiators this year. Illinois comes in at No. 26 in this year's ranking, suggesting it could be a swing state. History, though, has it going Democratic despite the fact that its drivers have a 1 in 162 chance of a deer-vehicle fender bender.

Not surprisingly, Hawaii, Barack Obama's home state, has the poorest odds of deer-vehicle collisions. Drivers there have a one in 6,800 chance of striking a deer within the next year, which, coincidentally, are the same odds Mitt Romney has of winning the state come November 6.

If it's any consolation, Hawaiians are more likely than most Americans to suffer an animal encounter much, much worse than hitting a deer with a car. Odds that you'll get attacked by a shark in the island state are one in 900,000. In a good year.