Fleeing Burglar Points Gun at Cops, Who Respond With a Barrage of Bullets 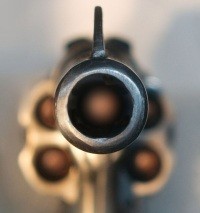 Last night at 10:42 p.m., police say, a 92-year-old woman living in the Hill neighborhood was awoken by noises in her basement.

She soon discovered three burglars, described in the police report as three black males, ages 17, 17 and 21. One of them pointed a weapon at the old lady.

But they then fled the residence, located on the 5600 block of Bischoff. As they fled, a neighbor watched them pile into a black Chevy Impala -- and, crucially, this neighbor got the license plate number.

About fifteen minutes later (and a mile away, as the crow flies), a house alarm went off on the 1300 block of Louisville, on the of the Clayton-Tamm neighborhood.

The homeowner, a 31-year-old white male, heard it. He came home and found that his flat-screen TV had just been stolen.

Finally, at 11:30 p.m., far across town, the showdown between the thieves and the cops:

Officers spotted the Chevy Impala and got it to stop in Walnut Park West, at Lillian and Mimika avenues.

The three suspsects from the burglaries got out and darted away. One suspect had a gun. He was ordered to drop it. Instead, he pointed it at the officers. According to the report, they fired "multiple times" at him until he dropped his piece and surrendered (and somehow, he wasn't injured).

Cops then found three guns and the flat-screen TV.