[UPDATED] Wash. U. Med School Says Memo Warning of "Eco-Terrorism" is a Hoax 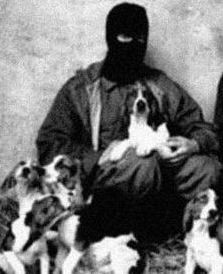 Update: Washington University School of Medicine spokeswoman Joni Westerhouse just got back to us with this, in no uncertain terms:


Washington University Protective Services did not send this memo to the medical center.

Westerhouse adds that she first heard about it from our blog post (below). The source who forwarded us the document also got back to us, insisting that a family member who works at the medical center did receive it in their mailbox. Hmm.

More updates if and when we have 'em; meantime we've revised the original post and uploaded a copy of the purportedly genuine counterfeit memorandum.

Original Post: With militant animal-rights activists converging on St. Louis for a national conference this weekend, security personnel at Washington University are warning staffers at the Medical Center "to be on high alert for potential terrorist activity," according to an electronic copy of a memo on Washington U. letterhead that was forwarded to Riverfront Times.
The memo cites potential dangers that include "break-ins, arson and animal kidnappings."

St. Louis Vegans, a local group participating in the conference, confirms on its website that Wash U. facilities in the Central West End are "a major target of opportunity...particularly for the schoolʼs use of primates" in medical research.

The memo, signed "WUSM Protective Services," states that campus security is "taking the threat of eco-terrorist activity...very seriously," adding that a primary goal of activists will be "obtaining video footage of [research] animals." Thus, the memo advises:

Every precaution should be taken to make your animals 'presentable.' This should include replacing bandages often, ensuring animals have adequate food and water, and employing heavy security where there are animals in a post-op stage or animals with visible evidence of surgery or implants. Take extra steps to maintain all Animal Welfare Act standards. [emphasis in the original]

This weekend's conference -- entitled "Free The Animals - Effective Action Against Vivisection" --  begins Thursday at a Holiday Inn in south county. The program includes lectures entitled, "We Know Where You Sleep at Night: Investigating Animal Abusers," and "Investigating Animal Labs -- Getting the Dirt on Animal Abusing Criminals," as well as "A Case for Nonviolence." 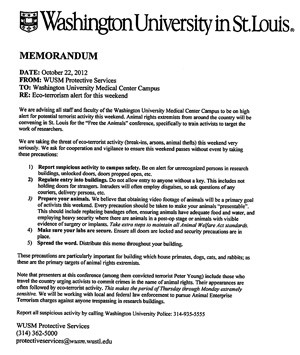 Young, a 35-year-old from the Pacific Northwest, describes himself an "unapologetic supporter of those who work outside the law to achieve human, earth, and animal liberation."

He was indicted in 1998 for cutting fences on Midwestern fur farms and setting free thousands of mink. He eluded the FBI for seven years before being caught shoplifting CDs from a Starbucks. He was sentenced to two years in prison after a conviction under the Animal Enterprise Terrorism Act (hence the memo's reference to Young as a "convicted terrorist").

Since his release, Young has spoken at Saint Louis University in 2010; see our coverage here.

The copy of the purported memo forwarded to RFT warns that Young and other presenters:


travel the country urging activists to commit crimes in the name of animal rights. Their appearances are often followed by eco-terrorist activity. This makes the period of Thursday through Monday extremely sensitive. We will be working with local and federal law enforcement to pursue Animal Enterprise Terrorism charges against anyone trespassing in research buildings."

Oh, and according to the memo: "Intruders will often employ disguises, so ask questions of any couriers, delivery persons, etc."