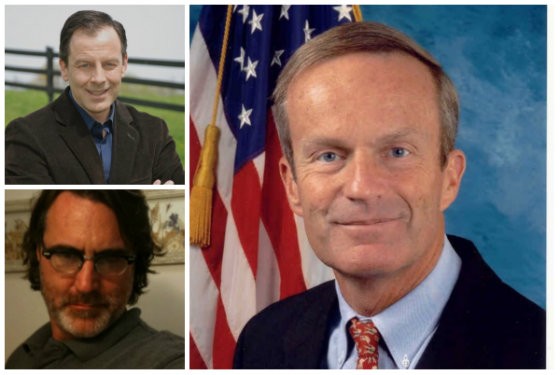 Late yesterday afternoon, Todd Akin's campaign got ahead of a Post-Dispatch scoop by publishing emails between the campaign's spokesperson and longtime political reporter Kevin McDermott.

The email from McDermott contained what appeared to be the story's first four paragraphs revealing that Akin was arrested not once, but at least three times at anti-abortion demonstrations in the '80s.

"I asked them to take it down and last I looked it was still up. I'm not going to have a cow about it," said McDermott shortly after his version went live. "That's just not what I expected."

The email exchange was between McDermott and Akin spokesman Rick Tyler. McDermott said that what he sent was a rough draft intended to give the Akin campaign an opportunity to respond, but was not ready for publication.

"That's the funny part, I kind of feel like I was doing them a favor, but maybe they didn't see it that way," said McDermott.

Akin previously told his supporters in a speech that he'd been arrested blocking the entrance of an abortion clinic and that he was a "jail bird." His campaign subsequently refused to talk about the incident.

McDermott obtained new specifics about the arrests from the Post-Dispatch's own archives. The articles were previously overlooked because they use the first name "William," a given name Akin traded for "Todd" when he entered politics. The clippings show Akin was arrested three times in 1985, and once had to be carried out of an elevator by police. Read the whole thing here.

In the exchange with Tyler, McDermott asks for comment and pasted the working lede into the email. Tyler responded with his own story about opponent Claire McCaskill's husband's legal trouble. About an hour later, someone Tyler forwarded the emails to made the exchange live on Akin.org:

Call if you need to.

Also, as far as I know, the $40 million in taxpayer money going to her companies never made the print edition of the Post-Dispatch. Is that true?

On Tue, Oct 23, 2012 at 3:52 PM, Kevin McDermott <> wrote: > > > Hi guys. We're going up with this soon, wanted to get your response to it. > > Main question: Did Rep. Akin have a responsibility to reveal the full scope > of his activities and arrests, after the topic was broached last month? > > (The arrest dates are 3/15/85, 3/30/85, 4/7/85 and 5/9/87) > > Thanks. > -- Kevin McDermott > > > > ST. LOUIS - Congressman Todd Akin was arrested at least four times in the > 1980s during anti-abortion protests, not just the single time he has > publicly acknowledged, the Post-Dispatch has learned. > > > Akin's three previously undisclosed arrests, all in 1985, were for criminal > trespass and resisting arrest at abortion clinic protests in St. Louis and > Illinois. In one of the events, according to Post-Dispatch coverage at the > time, Akin had to be carried by police to an elevator because he refused to > walk. > > > The additional arrests came to light during a new search of the newspaper's > archives. The arrests were missed in previous searches because the news > stories had listed Akin by his given first name, William. > > > Akin subsequently started going by his middle name, Todd, when he began his > political career in the state legislature in the late 1980s, and has been > listed as Todd Akin in media coverage since then.

"I've never had anybody just grab an inside note like that and just put it up on their site," said McDermott. "I would call it a lapse of professionalism."

Let's parse the damage here. Yes, Tyler successfully scooped the P-D, but McDermott's final version is much longer and ultimately what people are going to look for. McDermott said his biggest qualm now is that the Akin.org post contains inaccuracies -- the email version cites four arrests which the paper amended to "at least three," for example.

But what of the wisdom of sending an unpublished section -- even if just for comment, just before publication -- at all? McDermott said that he doesn't do it often and it's something he will be more careful about in the future. He explained his decision this way:

"I've dealt with the campaign before and obviously there's some contentiousness there, but I never had reason to believe that I couldn't trust them with a simple understanding that this is all rough draft at this point," he said. "Basically it's not that unusual to send them a relevant piece of a story by way of asking a question. We're trying to give them an opportunity to respond. It's as easy as saying, 'This is what the story is going to say,' you just grab a chunk of it."

We called Akin's campaign but have not heard back.

Meanwhile, McCaskill is suspending her campaign for a few days to attend to her gravely ill mother. Akin tweeted his "thoughts & prayers" to the McCaskill family, though if we've got the timeline right the McDermott-Tyler exchange went live at almost the same time.

This is not the first time in the 2012 political season that a campaign has tried to take the edge off of a story by making correspondence with the reporter public. Just check out this whacked out exchange between Connecticut Senate candidate Linda McMahon's camp and a Huffington Post reporter.

So -- are these the new rules of political reporting or just examples of a couple of flailing camps going too far?