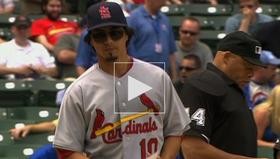 So it's come down to this yet again.
Another deciding game, the third such win-or-go-home contest the Cardinals have taken part in this postseason. They smacked the Atlanta Braves in the mouth in the first scheduled play-in game in major league history. They engineered one of the greatest comebacks in postseason history to send the Washington Nationals to their October tee times. And now, tonight, the Cards will try to face down the San Francisco Giants for all the National League marbles and a chance to defend their championship in the World Series.
Pitching has been the story of this series, and so pitching is where we will look now. Kyle Lohse, making yet another could-be-his-final-start-in-a-Cardinal-uniform, taking on Matt Cain, the San Francisco ace looking for some redemption. The best each staff has to offer, with everything on the line.
This is a Joe Friday sort of look, as in you're getting just the facts, ma'am. (Or sir. We don't discriminate here at the RFT.)
Kyle Lohse (16-3, 2.86)
Lohse has already won once this series, beating the Giants in game three. It was an unusual outing for Lohse; he allowed 5 walks in just 5.2 innings (and 12 baserunners overall), but he managed to hold San Francisco off the scoreboard, giving them just one run.
Lohse was better at home than on the road in 2012; his ERA pitching in Busch Stadium was an outstanding 2.33, vs a 3.41 away from home. His career splits are even more concerning; his home ERA in 171 games is 3.98, while his career ERA on the road is an ugly 4.91.
The only other time Lohse faced the Giants in 2012 was his last time out; he didn't see them in the regular season this year. For his career, Lohse has faced San Fran a total of five times, all starts. His ERA is 3.78, and he's allowed a .703 OPS against.
The road numbers are a concern; I've never really thought of Lohse as one of those guys with a major split, but he's a full run better at home over the course of his career.
Matt Cain (16-5, 2.79)
Cain pitched against Lohse in game three, and he got knocked around by the Redbird bats. It was largely a continuation of what the Cards have done against the San Francisco righty in his career; despite being one of the best young pitchers in the National League, the Cardinals have, for the most part, hit Cain remarkably well.
Cain is an entirely different pitcher at home than he is on the road, particularly in 2012. This year his ERA pitching in AT&T Park was 2.03, vs a 3.56 mark on the road. His career split isn't as dramatic: a 2.98 home mark and 3.61 away. Considering the game tonight is taking place in San Francisco, this a scary split for the Cardinals.
On the other hand, the Redbirds have beaten up on Cain in his career, and especially in 2012. He faced the Cards twice this season and was lit up to the tune of a 6.94 ERA and .884 OPS against. His career numbers against the Cardinals aren't as bad, with a 4.94 ERA and .749 OPS against in 8 career starts, but for a pitcher of Cain's caliber, even those marks are somewhat stunning. In fact, both that OPS against and ERA are the worst for Cain against any National League team. In other words, the Cardinals kind of have Matt Cain's number.
Cain has the big advantage in home/road splits; Lohse has a significant edge in terms of numbers vs opponent. I say the Cardinals get it done tonight. They put up their usual offensive performance against Cain, and Kyle Lohse keeps the Giants off the board with his particular, peculiar brand of magicianship.
The Redbirds are going back to the World Series. Take it to the bank.