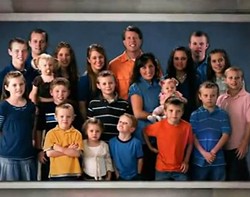 Oh dear, pardon us, we were just having a visceral reaction to a video of the Duggar family -- stars of the TLC show 19 Kids & Counting -- singing at a Todd Akin rally.

Because if there's one thing a foundering campaign needs, it's a bunch of children of the corn being forced to perform like trained monkeys when they're too young to have any idea whom or what they are supporting.

With so many Republicans pulling their support after the "legitimate rape" comment, reality TV show stars were apparently the next best thing. And why not TV's creepiest family, the Duggars, who have nineteen (thousand) kids and named them all something starting with "J" and use all this as an excuse to talk about how abortion is wrong and the earth is only 10,000 years old and shit like that.

BuzzFeed political reporter Rebecca Berg -- a Mizzou grad and former Post-Dispatch intern -- has been back in state to track the comings and goings of Akin as he campaigns against Claire McCaskill. The Duggar family joined the campaign on Tuesday and Wednesday for several stops in rural Missouri. Berg sent this dispatch from the campaign trail and caught the Duggars' performance on tape.

According to Berg, this was the last of seven tunes the Duggar kids performed:

In all seriousness, we're not trying to come down on these kids -- again, they have no idea what's going on. The only thing that's truly creepy are the adults who made this happen.