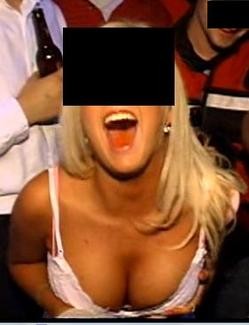 Several years ago, Tamara Favazza of St. Louis county sued smut mogul Joe Francis after she appeared topless in his Girls Gone Wild Sorority Orgy 2 video even though she claimed she never gave consent.
She finally won her judgment last April for $5.8 million.
But now she's having trouble collecting, according to court records, because Francis is hiding all his blingiddy-bling-bling.
The Medler Law Firm in Clayton is now representing Favazza (her former attorney, Stephen B. Evans, was just indicted yesterday on unrelated charges of fraud). They've filed suit in federal court to make Francis pay up.
They claim that he has

engaged in a scheme to defraud the Plaintiff by changing the Defendants' names, transferring assets, closing accounts, contracting vendors to have contractual payments made to new parties, and other methods.

And he's got the assets to pay her if he really wanted to, they claim. Specifically:
-- A $2 million jet that seats 22 people
-- A $10 million house in Bel Air, California
-- A $30 million beachfront mansion in Punta Mita, Mexico
-- One or more vehicles valued at more than $100,000
Favazza is suing twenty different defendants in this case. There's a status conference today. If the Medler Law Firm calls us back, we'll update this post.