Update October 17: Alert reader Mike M. from Arlington, Virginia, has written in with a hopeful message about St. Louis' prospects for a Major League Soccer team. Find out what it is at the end of this post.

Original Post: As far as malls go, Union Station has always been kind of a dud. Sure, the layout is much prettier than the one at the Galleria and the Whispering Arch is pretty neat, but the place might as well have "Tourist Trap" written on it in big neon letters.

As of today, though, the station has a new owner, Lodging Hospitality Management, a Westport-based company that owns, among other properties, the Hilton at the Ballpark and the Cheshire Inn. LHM promises a complete overhaul of the mall -- including a Major League Soccer stadium.

Originally when LHM announced that it planned to buy Union Station, its goals were more modest: trading retail for office and meeting space, converting the hotel from a Marriott to a Double Tree, installing a train museum and maybe offering private train service to Chicago and wineries in Hermann.

But now, nextSTL reports, it is thinking about a soccer stadium, too. Never mind that St. Louis doesn't have a Major League Soccer team (though the dream never dies). We have Saint Louis University! We have youth teams! We have lots of people who would want to kick a ball around a 20,000-seat stadium!

Well, and OK, our prospects for getting an MLS team appear brighter than they have in several years. Why is that? Writes Alex Ihnen of nextSTL:

LHM owns Union Station and has been connected to THF Realty to create a redevelopment plan. THF's chairman and owner is Rams owner Stan Kroenke. Kroenke also owns the MLS Colorado Rapids and is the majority stakeholder of the Arsenal football club. If Kroenke decides to support this effort, the ownership piece of the MLS puzzle will be complete.

If they build it, will St. Louisans come? 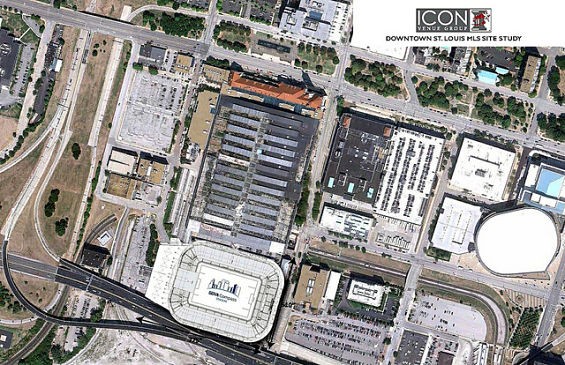 Well, it's more convenient than Collinsville, which had been previously suggested as a site for a soccer stadium. And in 2011, MLS drew an average of 17,872 fans per game, more than either the NHL or NBA (though, to be fair, it was only a matter of a few hundred people, and it's still way behind the NFL and MLB). Plus, St. Louis is traditionally a soccer town; about 10 percent of its residents actively play, more than the national average, and some folks here still get misty-eyed over the 1950 World Cup.

On the other hand, AC St. Louis, a North American Soccer League franchise and St. Louis Athletica, the much ballyhooed women's team, both quietly shut down after a single, poorly attended season.

If the stadium does get built, it would likely get wedged in between the old train shed and I-64, near the MetroLink station. In the past few years, other 20,000-seat stadiums have been built for between $60 and $100 million. This would be in addition to the $20 million LHM forked over for Union Station itself.

But if history is any indication, nobody should get their hopes up yet.

I thought I'd point out (although you might already be aware), that Stan Kroenke has to give up his majority control of the Denver area professional sports team (Nuggets, Avalanche, and Rapids) by 2014, since the NFL doesn't allow its owners to have a controlling interest in professional teams outside of the location of its NFL team. That might make Kroenke even more interested in getting involved in soccer in St. Louis.

But then what does this mean for the Rams???