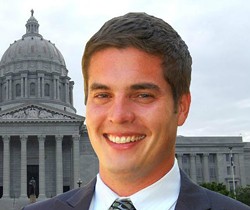 But he also has a slightly more surprising affiliation, one that retired Post-Dispatch columnist Jerry Berger says the Boone County Republicans just discovered.

"Official state paperwork shows that on June 14, 2011, Richards created a political committee called Show-Me Cannabis Regulation," Berger writes on his blog. "The group's website calls it 'an association of organizations and individuals who believe that cannabis prohibition is a failed policy.'"

Missouri Republicans have learned their latest replacement nominee in House District 47 set up a political committee last year promoting the legalization of marijuana. Mitch Richards of Columbia was picked to run for the newly drawn legislative seat by a handful of Boone County Republican officials. The GOP was desperate because its first candidate suddenly quit the race. Two replacement nominees also bailed out. Richards, who arrived in Columbia from Montana about four years ago, became the fourth pick, apparently without a background check.

Berger also did a follow-up post about the issue, quoting some of the feedback he got on his initial post:

Some commenters insisted local Republican leaders knew about Richards' pro-pot background before he became their fourth choice to fill a vacancy for the House nomination in the new district. But another commenter stated: "State Republican leaders are making frantic calls today. They were unaware of any of Mitch Richards' pro-marijuana activities."

It's true -- Richards was the founding treasurer of Show-Me Cannabis. But was it really something he was keeping a secret? "I haven't been out there talking about it all the time, but I would never deny that," said Richards by phone yesterday. "I was asked about it and I was very honest about it."

Richards says there are YouTube clips floating around of his participation at Show-Me Cannabis events for anyone to see. He supports the right of sick patients to use medical marijuana and thinks that legalization of pot is an issue that should be left up to the state's voters. He says it's a position he still stands behind -- though it is not a centerpiece of his current campaign -- and that it should not be seen as incongruous with the 'R' after his name.

"I don't think the federal government has the power to tell states that they can or can't allow it. I feel the same on many federal policies, Obamacare, it applies to a lot of things that are at the federal level," he says. "Obviously I feel when it comes to medical marijuana needs, the policy that we have now is not right."

"We were aware of it and in fact, the official meeting where he was officially nominated, the press was there. That was one of the questions at that press conference," says Cornett. "If that columnist had any sense at all he would've know that. It's absolutely untrue that we didn't know that or that Mitch hid that from us."

In regard to the "frantic calls" Republicans are making over the matter, Cornett says he hasn't heard from anyone.

Current Show-Me Cannabis treasurer John Payne says Richards was with the group only a short time, but that perhaps Richards should be praised for bucking trends in his party.

"I think, you know, the article just really doesn't understand what goes on in Columbia, because Mitch is really well known there. I don't think it's any secret that Mitch backs marijuana legalization," say Payne.

Furthermore, Payne -- who also identifies as Republican -- says this is just a sign of things to come.

"There's definitely some change going on in the Republican party in Missouri. A lot of younger people are more libertarian-minded," he says. "Show-Me Cannabis welcomes people from all parties. I think we can all see the problems with marijuana prohibition."