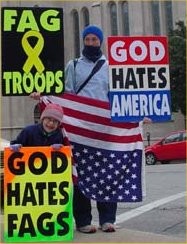 Federal appeals judges in St. Louis ruled today that yes, in fact, the City of Manchester does have the right under the Constitution to restrict where and when certain folks -- meaning the hate-spewing death-cult, Westboro Baptist Church -- can picket funerals.
(Who would want to picket a funeral? Oh, only Pastor Fred Phelps and his followers at Westboro, who believe that God punishes America's tolerance of homosexuality by killing U.S. citizens, such as soldiers and tornado victims.)
Back in 2007 -- reacting to Westboro's activities -- the City of Manchester passed an ordinance pushing any funeral protests 300 feet away from the ceremony, and one hour outside the beginning and end of the ceremony.
The folks at Westboro sued, with the support of the ACLU of Eastern Missouri. They won at the US district level. But the municipality appealed, and today, the Eighth Circuit Court of Appeals took their side.
The judges concluded that the City of Manchester's restrictions were permissible under the First Amendment because they were content-neutral, narrowly tailored and served a significant government interest.
Read the judges' opinion below.
The ACLU's Tony Rothert lamented the ruling, saying in a written statement that the City of Manchester's restrictions for burial services have never been recognized by the Supreme Court.
If Westboro appeals, and SCOTUS grants cert, then we may find out what the robed justices in Washington really think.
Read theappeals decision below.
Phelps-Roper v. City of Manchester