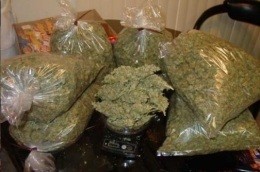 Former St. Louis Metropolitan Police Sergeant Larry Davis was sentenced in federal court today to 57 months in federal prison for seizing a huge amount of pot from places like FedEx and UPS and -- instead of submitting it into evidence -- taking it home and selling it with his brother, Linus.

The brothers' scheme lasted from October 2010 until last January.

But how much pot we talkin' 'bout?

By contrast, Nelly's tour bus was recently busted for having (among other things) only ten pounds of pot. Child's play!

Here's what a pound of pot looks like, by the way:

Davis pleaded guilty to the offense back in April, a month after his brother did likewise.

Don't forget: Davis is also at the center of a lawsuit against the Police Board of Commissioners. A woman now claims to have video evidence that Sgt. Davis falsely arrested her back in 2007 (before all this pot-dealing stuff).

She's accusing the board of failing to look into it or to discipline him in any way.