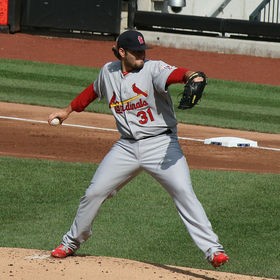 It went about as well as one could have possibly hoped for the Cardinals in game one of their National League Championship Series matchup against the San Francisco Giants. The offense broke through for a big chunk of runs against Madison Bumgarner, and the pitching staff flipped the expected script, turning the clock back to October of 2011 as the starter exited early and the bullpen shut down the opposition.
The Cards now have home field advantage, no small benefit for a team that boasted one of the best home records in all of baseball this season. Plus, the Redbirds managed to win with what is probably the weakest link in their starting rotation right now on the mound; the best is very much yet to come for this club on the pitching side of things.
It was a good night, is what I'm trying to say.
The Cardinal offense is a different animal with Carlos Beltran hitting. At the beginning of the season, when he was tearing up the National League at a career year pace, this offense looked completely unstoppable. When he went into a funk at midseason, his back and knees combining to slow him down, the offense would occasionally find itself stalled. That's not to say this team can't hit without Carlos Beltran, mind you; this is still a very talented, very productive offense either way. But Beltran producing at a high level completely changes the dynamic.
The biggest revelation of the playoffs, though, on the hitting side at least, has to be Daniel Descalso. Dirty Dan seems to have found some way of taking those bursts of clutchiness we occasionally saw last season late in games and stretched them out, filling entire games. Or, at least, that's the narrative I would like to sell you. The truth is Descalso is just on a hot streak, but I'll take it as long as he wants to continue hitting like mini Chase Utley.
Of course, Allen Craig has been brilliant, too; he posted a 1.014 OPS in the division series, but we've come to expect excellence from him, I think. He was held in check last night, but I don't expect that to last long. Oh, and that Freese guy seems to know a thing or two about hitting in October...
Best of all, though, was the bullpen. The Cards' relief corps combined to throw 5.1 innings of scoreless relief, rescuing the club from a short outing by the starter. Edward Mujica may have been the most impressive, striking out the side in a brilliant seventh inning, but all the relievers acquitted themselves more than admirably.
The only real concern, for me at least, was the performance of Lance Lynn. Not because he pitched poorly, mind you; I can accept a subpar outing regardless of the timing. Those things happen. No, what I'm more concerned with is the way he struggled; he came out firing on all cylinders, throwing as hard as I think I've ever seen him throw, and looked nearly unhittable for the first couple innings. Then, all of a sudden, the fourth inning rolled around and Lynn looked like a completely different pitcher.
What I'm worried about with Lynn isn't the fact he struggled; it's the fact he looked like he hit the wall. He looked like he just flat-out ran out of gas. What I'm worried about with Lynn is fatigue. It was, after all, his fourth appearance last night in just the first seven games of the postseason for the Cards. Four appearances in seven games isn't bad for a reliever, but when the pitcher in question is bouncing back and forth, and you're counting on him to handle starting duties the rest of the way, that's a much different situation.
Going forward, I have to admit I'm going to be watching Lynn with more than a little bit of concern. If the big man is wearing down from the constant usage, that could be a real problem for this Cardinal staff. If he's the only starter who isn't able to go deep into games, it's probably not a huge issue. But it does tax the bullpen, putting pressure on every member of the staff. That's a scary proposition considering how far there still is to go.
For now, though, things are looking very, very good for the Redbirds. They have a chance tonight to take a commanding series lead with Chris Carpenter on the mound, to put the Giants in a tough corner by stealing both games on San Francisco's turf. It's almost a free shot, too; even if the Cards lose they've already done what they really needed to do in taking at least one from the Giants at home. You have to like their chances.