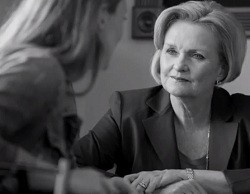 The commercials all feature sexual-assault survivors, including one woman who says she's a Republican who chose not to take emergency contraception at the hospital. "Because of my personal beliefs, I declined," she says. "Here's what else I believe: No woman should be denied that choice."

Below are all three spots. Take a look, then tell us: Will these ads sway voters?