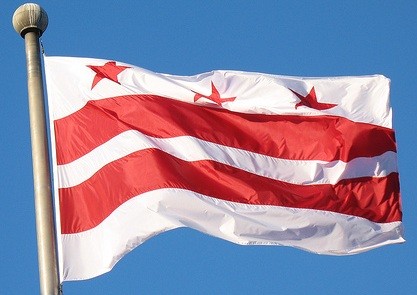 See this flag? It could be flying over St. Louis City Hall next week should the Nationals beat the Cardinals in the National League Division Series.

Yesterday, Mayor Francis Slay agreed to a wager with Washington D.C.'s Mayor Vincent Gray that he'd fly a special version of the city's flag -- emblazoned with the words "Taxation Without Representation" -- over St. Louis City Hall if the Nationals win the series. Gray has agreed to fly St. Louis' "Three Rivers" flag over his town's city hall should the Cardinals win.

Said the cocksure mayor of D.C. in a statement: "I look forward to the citizens of the City of St. Louis getting a lesson not only on the baseball diamond when the Nats take the series, but also in the uniquely unjust situation in which the District's 618,000-plus residents find ourselves -- denied voting representation in Congress and ultimate authority over our own budget and affairs -- when our flag flies over Market Street in downtown St. Louis!"

Gee, Mayor Gray, you really got us feeling sorry for you with that one.