If you were downtown yesterday evening, you might've caught red-clad Cardinals fans headed to Busch Stadium, an especially brilliant sunset and maybe a scant group of activists commemorating the one-year anniversary of Occupy St. Louis at Kiener Plaza.

Also hard to miss was a surreal and sizable group of St. Louis' most ardent Tea Partiers, holding signs in support of coal and Todd Akin on the corner of Market and Eighth streets, just outside the Peabody Energy Corporation building.

Gateway Grassroots, a local spinoff of the Tea Party led by Stacy Washington of the blog Move on Up and conservative pundit Dana Loesch, organized an after-work flash mob to protest Claire McCaskill's energy policies in front of the coal corporation that stands to suffer the most from tighter regulation.

Daily RFT caught up with Loesch, who was clad in all black, with studded leather gloves and a Guy Fawkes mask (that she says belonged to Andrew Breitbart), as the demonstration broke up.

"Our whole focus here is that McCaskill's policies on coal are going to hurt energy bills. Missouri is eleventh in the country in terms of energy affordability and that's not going to be the same once all these regulations go into effect," Loesch said of McCaskill's support of utility MACT rules that will require tighter controls for mercury, particulates and acid gases at Missouri power plants. Energy companies say those regulations, which are supported by the Environmental Protection Agency, will drive up utility costs for residents and business owners.

Electricity is dirt cheap in Missouri, largely because 81 percent of the state's energy comes from coal imported from Wyoming. But as coal continues to fall out of vogue with the environmentally conscious set, the industry and its supporters are on the defensive.

Loesch said that while she supports consumers making their own choices about green energy, she "just [doesn't] think the government should be forcing us in that direction."

Peabody Energy, which is headquartered in downtown St. Louis, is the largest private coal merchant in the world. But that doesn't mean they wanted Gateway Grassroots' support. 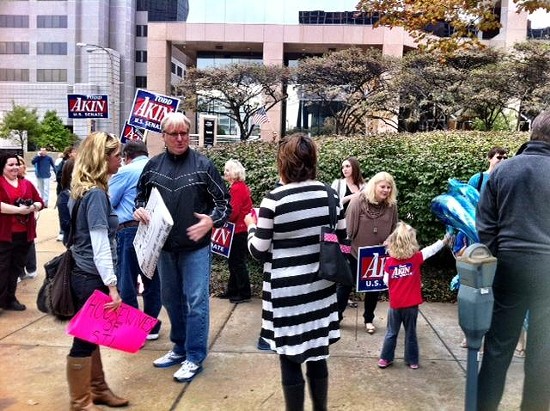 According to Arielle Klogsbrun, a community organizer with Missouri Renewable Energy (MORE), a group that she says is trying to "run Peabody out of business," security officers from Peabody told Loesch and friends to move their tea party off their plaza and onto the public sidewalk.

A security guard with the Peabody building said it's against company policy to host political demonstrations on their property. So much for friendship and freedom. "You'll see that these people never talk about global warming or the environmental impact of relying so heavily on coal," said Klogsbrun, who, just to be clear, is an anti-coal activist who attended the rally as an observer. She stuck out to Daily RFT immediately as the only person there wearing a green shirt (which you might say is emblematic of larger philosophical disagreements between herself and the pro-coal movement).

Daily RFT missed the beginning of Gateway Grassroots demonstration, but here's how we fiendishly imagine Peabody's cruel eviction went down:

It's also worth mentioning that a number of Todd Akin supporters also crashed the rally. We recognized several of the ladies from his Missouri Women Standing with Akin video in attendance. Like we said, it was a Tea Party rally, and it seems everyone is on board with the motto "anyone but McCaskill" at this point.