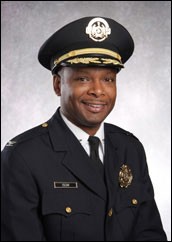 January 1, 2013 will be the last day on the job for St. Louis Metropolitan Police Chief Dan Isom, who is retiring to become a criminology professor at the University of Missouri - St. Louis.

The press conference is about to start; here's a copy of the memo he released to SLMPD employees today.

After a long deliberation and resolution, I write to inform you of my pending retirement on January 1, 2013.

It has been proven that the Metropolitan Police Department is one of the best police agencies in the entire country and representing each of you as your Police Chief has been one of the most rewarding honors of my entire career.

I believe our accomplishments over the past few years have positioned this organization well for the future. In the next couple of months, I will continue to focus on addressing crime with you, finalizing plans for the new headquarters building, and assist in implementing any new changes for our organization.

I hope to visit with each of you, both civilian and commissioned, to personally thank you for your service and dedication to the City of St. Louis.


We wonder how "long" the "long deliberation" actually was. Everybody knows a college professor's job can be pretty cushy. In contrast, the SLMPD has a lot of problems, many of which land on the chief's desk.

That's become real clear in the lawsuit filed against former police lieutenant, Henrietta Arnold, which is an absolutely outrageous and under-reported example of SLMPD dysfunction (read more here and here).

Isom was just taken to task last August in that suit by US District Judge Carol Jackson, who concluded in an order in that the evidence put forth so far "would allow a jury reasonably to conclude that defendants [Internal Affairs Division director Reggie] Harris and Isom failed to supervise" three layers of high-ranking officers.