There's a war going on in East. St. Louis right now.  The forces of law and order are struggling to contain the forces of drugs, crime, poverty and desperation.

The most recent solution conjured up by Mayor Alvin Parks and the cops: Ban gang colors, then lock up kids spotted on the streets during school hours. Other proposals: Shut down the nightclubs, get rid of the illegal guns.

But other American cities allow citizens to wear certain shades of blue, own firearms, and run nightclubs, and they don't look as post-apocalyptic as East Boogie.

How about this: Forget the post-hoc solutions, and start way earlier by banning single-parent homes. Because there are tons of them, and obviously these kids need more guidance. 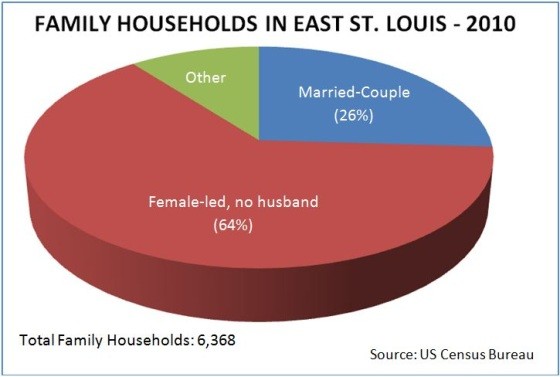 According to the federal government's 2010 U.S. Census figures, there are 6,368 family households in the East St. Louis Township.

A quarter of them are led by a husband-wife team.

But 64 percent -- almost two-thirds of all family households in East St. Louis -- are led by a woman with no husband present. Most of these women are trying to raise kids under 18, the figures show.

Any parent, in any locale, already has the giant responsibility of instilling morality in a kid, making sure he does his homework and keeping him from running with the wrong crowd. But in East St. Louis, many women must shoulder this burden all by themselves -- in an already bleak economic situation.

So, as long as Mayor Parks is in the business of irrational (and probably unconstitutional) bans, he should try one that starts before it's too late: Arrest any father that ducks out of his responsibility to his kids.

(By the way, we're obviously exaggerating here; but we're not the first ones to harp on the problem of single-parent homes. See our feature on Halbert Sullivan and the Fathers Support Center, which ran last summer.)