Have you seen our 2012 "Best of St. Louis" issue, yet? The paper went live online yesterday and began hitting newsstands this morning. It's chock full of 370+ items on what makes our town such a great place to live.

One of the items that didn't make this year's issue was Best Retail Mascot. Why? Because we've never had such a category before, and it's doubtful we will again. Still, we'd like to tell you about Ernie.

If you've driven down Manchester Road through Rock Hill, chances are you've seen Ernie. You just probably thought he was an ornament. The blue macaw that spends mild afternoons roosting outside the door of Tint Crafters Central (9740 Manchester Rd., 314-965-0100) is so big and gorgeous, he doesn't seem real. That is, until you get a bit closer.

Ernie will raise his wings and bob up and down on his legs while screeching out a hello. If you're lucky, he may even ask, "What's up, man?" Ernie's owner, Kia Vali, has been taking the bird with him to work since soon after he opened his window tinting shop in 2000. 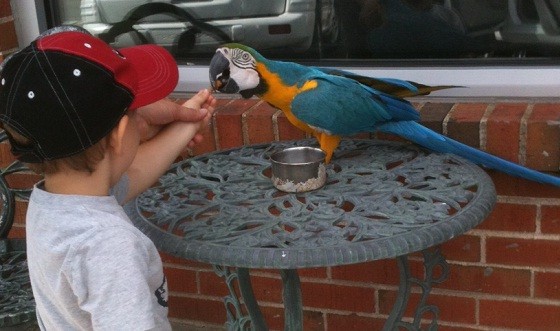 "These birds are so sociable. They don't want to be left at home, and customers love him," says Vali. "I had a customer the other day bring Ernie a gold chain to play with in his cage."

Of course, a talking bird can also lead to some uncomfortable moments, such as the time Ernie called a customer a "loser" and the person thought it was Vali who hurled the insult. "His previous owner taught him some bad words," Vali admits. "But now he's more prone to say 'I love you.'"