[PHOTO] Wild Bobcat Prowls Near Missississippi River. How Common are These Big Felines?

A reader up in Pike County, Illinois just sent us a photo of a bobcat. It was taken automatically by a wildlife camera on their property near the Mississippi River -- and in broad daylight.

It's a totally sweet picture -- and as loyal readers know, Daily RFT lurves blogging about animals (albino hummingbirds, hyenas doing it with each other, monkeys peeing into their own mouths).

But how rare are bobcats in our area?

According to Jim Low, spokesman at the Missouri Department of Conservation, it's "not at all unusual" for a wildlife cam to catch a bobcat prowling around -- even Low himself has done it on his property near Jefferson City.

Adds Low: "Bobcats are much more common than most people would guess, because they are secretive."

This one apparently had nothing to hide. 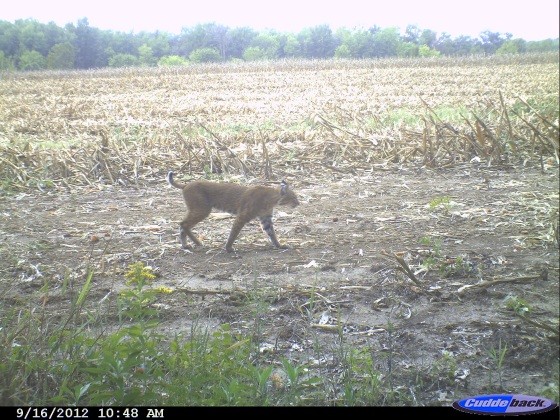