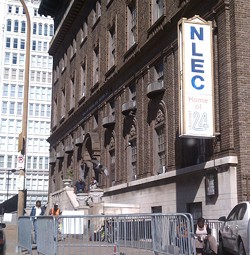 Update: The victim has been identified as David Douglas. Daily RFT also received a response from Reverend Rice.

According to the St. Louis police, a 46-year-old man plummeted to his death on Tuesday at the New Life Evangelistic Center in downtown.

The center, run by Reverend Larry Rice, has been at the center of controversy over how to properly house and care for the city's homeless. The city recently blocked off streets around the center to prevent people from sleeping on the sidewalks outside the shelter, after complaints that the area was unsanitary and dangerous.

The death, however, occurred inside the shelter at about 7:40 p.m. last night.

A police spokesman confirmed that the man fell backwards from a third-story stairwell and tumbled to the basement floor. He died of massive head trauma.

Rice confirmed previous reports that Douglas arrived at the shelter extremely drunk last night and says Douglas was written up for his erratic behavior. Douglas was not a regular at the shelter, according to Rice, but arrived a day or two ago from Hannibal seeking counseling for depression.

Rice says that no one was around when Douglas ascended the stairs and tipped backwards, falling four stories. No one, he adds, could've pushed Douglas. He says the building is in compliance with all its codes and that there was nothing he or his staff could have done.

Though he wouldn't say for sure, Rice hinted that the fall may have been intentional.

"This man, obviously he was on a lot of medications. We didn't know he also had an alcohol problem, and he combined it with alcohol and ended up with this tragic event," says Rice. "People come in for help and unless they voluntarily tell you what medication they're on or that they have an alcohol problem, there's no way of knowing ... he could've just been a John Doe out there if we hadn't helped him."

Rice says Douglas's parents are deceased. He did have children, but they had no contact with their father.